After the Columbia Shuttle exploded in 2003, NASA announced that it would not attempt any further updates to the Hubble Space Telescope. The announcement said that the HST would be abandoned and allowed to de-orbit and fall into the Pacific Ocean. The world was stunned and an outcry followed the announcement. Astronomers, scientists, teachers, Congressmen, school children called, wrote and spoke out against the plan to give up on Hubble.

In light of the public outcry over abandoning the Hubble Space Telescope, NASA decided to look at repairing it again. A manned mission was suggested and then discarded in light of the space shuttle Columbia crashed in February 2003.

The HST-JWST Transition Plan Review Panel was formed. This was an independent group of six astronomers commissioned by NASA to study the fate of the HST, and how to move from using the Hubble to the new James Webb Space Telescope that was by now far along in the planning stages.

NASA felt this panel was needed because it did not want to just "give up" Hubble. Each advance in scientific knowledge HST provided raised new questions that were beyond the telescope's capabilities. In order to probe still deeper into space and further back in time -- to when the very first groups of stars, the "ancestors" of galaxies like ours, started to form -- a major new telescope, which went beyond the capabilities of the HST, was needed. The panel made several recommendations for preserving Hubble until the James Webb Telscope could be launched. 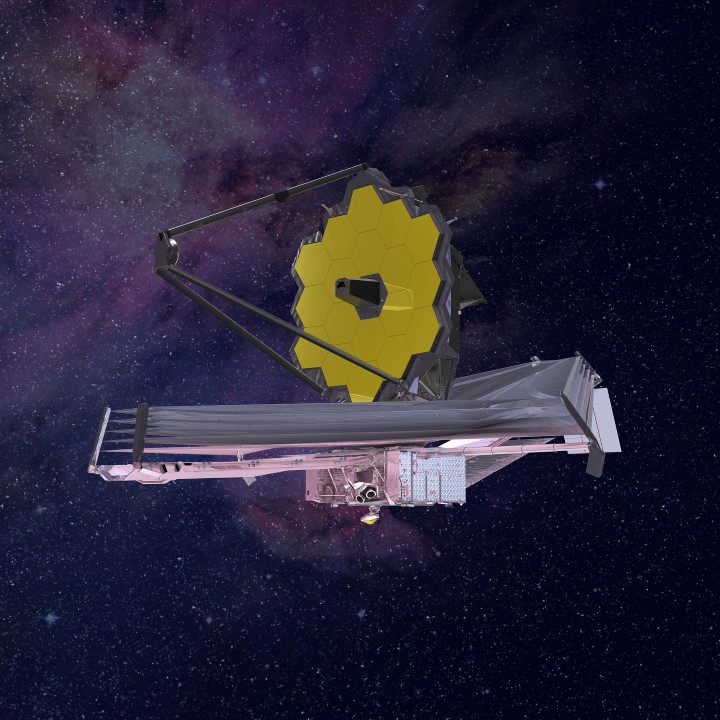 In January 2004 President Bush announced his plan for Americans to return to the moon, and from there prepare for a manned mission to Mars. No money was allocated for repairs to the Hubble Space Telescope. Without repair, the Hubble would de-orbit and the mission would die.

Later that year two scientists came up with another idea. John Grunsfeld, NASA'S chief scientist, and Ed Weiler, NASA associate administrator for space science, met with NASA Administrator Sean O'Keefe. They convinced the NASA chief that the technology needed to do space-based robotic repair was the same technology needed for President Bush's vision of a Moon base and a mission to Mars. All three activities require developing and programming robots. That means money for a Hubble servicing mission was already a part of NASA's budget. President Bush reorganized the budget in order to support these new missions.

In August 2004 O'Keefe announced a possible solution for repairing HST: a robotic-servicing mission. The Canadian Space Agency had a robot named Dextre that could be reprogrammed to repair Hubble.

Dextre is made of titanium, the same metal used in airplanes and satellites, and looks like a stick figure with a thin body and two 10-foot-long arms. The arms can turn, reach and grab in seven different ways.

Most of the work Dextre would do on the Hubble Space Telescope would be directed by people on the ground twisting and turning the robot using controllers, much like the ones used on video games.

The most important job Dextre would be programmed to do would be giving Hubble new batteries. Without new batteries the telescope would stop operating around 2008.

Other jobs planned for Dextre to do were to give Hubble a new camera and mount six new gyroscopes –- instruments that help keep the telescope level. 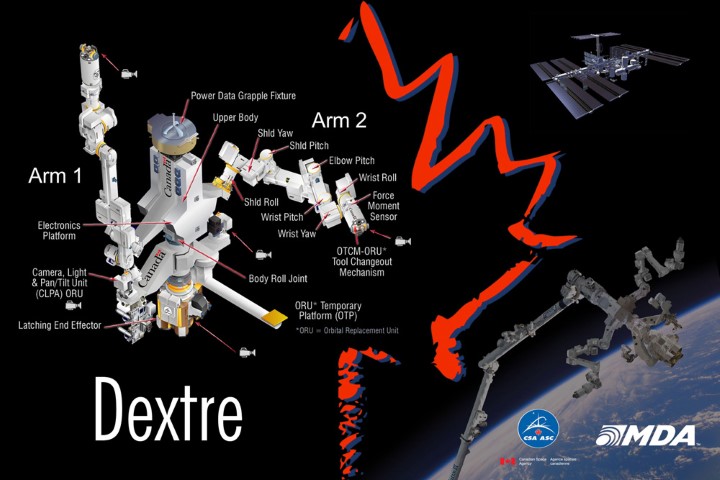 NASA scientists believed Dextre would be able to do the job in about a month. Robots, after all, can work around the clock, without needing to sleep, eat or go to the bathroom.

In order to get Dextre to Hubble, NASA needed to build a robotic vehicle that would dock with Hubble 360 miles above Earth. Riding along on this vehicle would be the de-orbit module. When the time finally came for Hubble's mission to end, the de-orbit module would steer the telescope into the ocean.

But in December 2004 the idea of sending the robot to do repairs was dealt a severe blow. Sean O'Keefe, the NASA administrator and strong backer of the mechanized undertaking, announced that the robotic mission was being discarded.

Two of the prominent reasons for this decision were that there was not enough time to program Dextre to ensure success, and there was no money to fund the preparation and the trip. After the announcement O'Keefe resigned as NASA chief.

In April 2005 the new NASA Administrator, Mike Griffin, told engineers at Goddard Space Flight Center to prepare a Space Shuttle servicing mission to Hubble. NASA had decided to restart the flight of the shuttles and Griffin said this servicing mission would take place if, and only if, the next two shuttle missions went well.

The first of those two flights, STS-114 in July 2005, while not completely successful, was not considered a failure. The parts that malfunctioned were marginal enough not be meet the criteria for a true failure. Since Discovery's external fuel tank lost large pieces of insulating foam during liftoff, NASA grounded the fleet again until the problem was solved.

But STS-121 had trouble getting ready to leave the ground. The external fuel tanks again were to blame. The engines on the Shuttle's external fuel tanks have sensors that tell whether a fuel tank still has fuel during liftoff. During testing, one of the four sensors had a slightly different reading than expected. In order to make sure the Shuttle was safe for the astronauts, NASA officials decided to remove and replace all four sensors. The launch was postponed until July 2006.

STS-121 had a very successful flight, and returned safely to Earth. This mission made a visit to HST in November 2007 look very promising, providing no other complications come up. 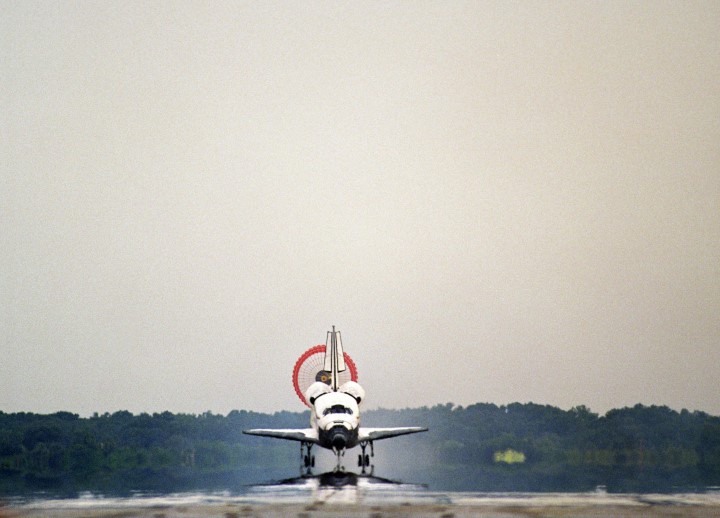 Clearly there was a probabilistic tone to discussions about Hubble. Servicing missions would have to occur by 2009 or the HST would freeze for lack of battery power. If repairs could not be made the Hubble Space Telescope would be doomed to fall to Earth around 2013.

But HST can't just "fall to Earth." The telescope is the size of a large school bus, and unlike other spacecraft, such as Project Genesis and Stardust, HST has no engines to guide it safely down. As it orbits, HST passes over many areas where people live. In order to make sure Hubble falls into the ocean, engineers needed to design a thrust system for it. This engine would have to be launched on a disposable rocket and robotically attached to the bottom of the telescope. Scientists on the ground could then control the re-entry and direct Hubble to a safe splashdown far from any populated areas.

The idea that Hubble would have to be revisited by a rocket again revived the idea of a repair mission. NASA set to work planning this mission, including the attachment of the thrust engine to allow for a safe landing. The mission called Servicing Mission 4 (SM4) was successfully launched on May 11, 2009.

The Cosmic Origins Spectrograph is designed for spectroscopy of faint ultraviolet targets. Its purpose is to study the origin of planetary systems, and how galaxies form and evolve. COS is almost 20 times as sensitive as the previous HST spectrograph, and able to observe distant quasars too faint to be seen before.

The Wide Field Camera 3 (WFC3) improved the discovery efficiency of Hubble. It is sensitive to wavelengths from the ultraviolet to the near infrared and has a larger field of view than WFC2. It allows Hubble to observe more galaxies at one time and has better performance characteristics. 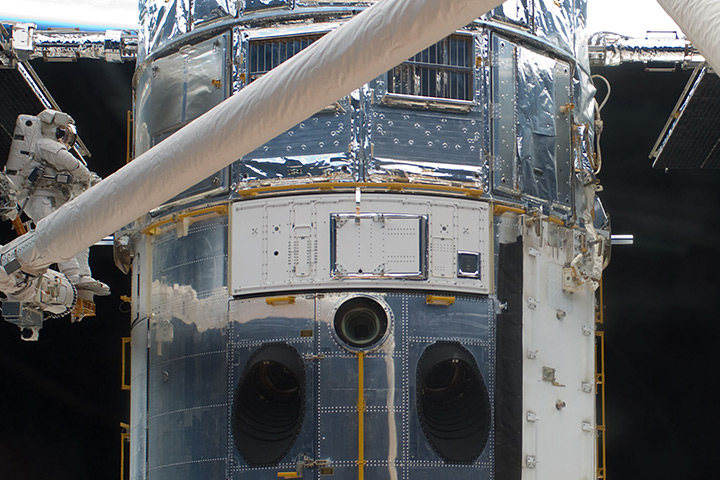 The Hubble Space Telescope has had several near death experiences: the explosion of the Columbia Shuttle in 2003 that led to the announcement that Hubble would be abandoned, and the near failure to get the shuttles flying again after issues with shuttle flights in 2005 and 2006, but it was repaired in 2009 and is operating well. It is expected to last until the James Webb Space Telescope is successfully in orbit. Enjoy the last years of Hubble!