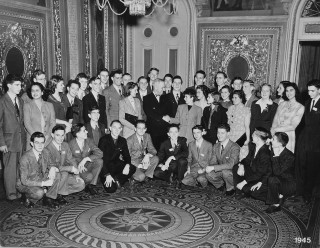 Science Talent Search of 1945: Winners of the 1945 Westinghouse Science Talent Search assemble with Vice-President Harry S. Truman. George Clark was among the top ten finalists who were selected as winners. He stands 6th from the left in the back row.
Credit: © All rights reserved by Society for Science & the Public (SSP)

My interest in science, which led me to become an experimental physicist, began when I was in the seventh grade in the public school in Flossmoor, Illinois, where I grew up in the 1930s together with a brother and two sisters. My mother was a graduate of Oberlin College, and a fine pianist. My father was a graduate of Yale College and M.I.T., and general manager of a stove factory in the nearby town of Harvey, Illinois, where I attended the Thornton Township High School.

I came across my father's college chemistry textbook entitled Elements of Modern Chemistry by Charles Wurtz, published in 1895. Father helped me set up a lab in the basement, and took me to a chemist supply store in Chicago. He told the clerk, "Sell him whatever he wants." I made all sorts of experiments and chemicals, some of which give me the willies when I think about them now. Among my father's books I found Amateur Telescope Making by Albert G. Ingalls. Following its instructions, I ground and polished a six-inch parabolic mirror and made it into a four-foot telescope that my father helped me mount in a field near our summer place. I still have that 6-inch mirror and even used it in one of the courses I taught at M.I.T. called "Junior Lab.”

I often went to the Rosenwald Museum of Science and Industry to gaze at the central display of the chemical elements, and to push the buttons on exhibits illustrating principles of mechanics and electricity. I had excellent teachers in school, and at the junior college attached to the high school where I took courses in chemistry and calculus before the days of “advanced placement.”

In 1945, I entered the Westinghouse Science Talent Search with an essay about the chemical work I'd done with rare earth elements, and won a trip to Washington. We had our picture taken with Vice-President Truman at the Capitol, and had tea with First Lady Eleanor Roosevelt at the White House.