It All Began With a Rocket... 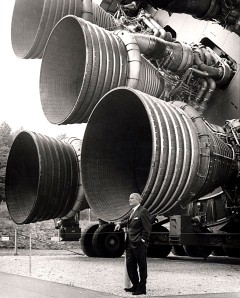 Wernher von Braun: A pioneer of America's space program, Dr. von Braun stands by the five F-1 engines of the Saturn V Dynamic Test Vehicle on display at the U.S. Space & Rocket Center in Huntsville, Alabama, circa 1969. Dr. von Braun served as the first director of the NASA Marshall Space Flight Center and was the chief architect of the Saturn V launch vehicle, the superbooster that propelled the Apollo spacecraft to the Moon.
Credit: NASA

Dr. Robert H. Goddard and His Rockets: Dr. Goddard and liquid oxygen-gasoline rocket in the frame from which it was fired on March 16, 1926, at Auburn, Massachusetts. It flew for only 2.5 seconds, climbed 41 feet, and landed 184 feet away in a cabbage patch. From 1930 to 1941, Dr. Goddard made substantial progress in the development of progressively larger rockets, which attained altitudes of 7800 feet.
Credit: NASA

My story, and for me, the story of multiwavelength astronomy, begins with the rocket. Without it, space science would not exist, and my life would have turned out very differently.

The American physicist, Robert Hutchings Goddard, was an early pioneer of rocket technology, but the German engineer Wernher von Braun mastered it. Developed by von Braun in the 1930s, the V-2 rocket was used during World War II to deliver one-ton warheads at supersonic speed from Germany to southern England. At War’s end, parts of captured V-2s were brought to the U.S. and assembled by the Army at White Sands, New Mexico, to be used for research and experimentation by government agencies and universities. I was a young scientist at the U. S. Naval Research Laboratory (NRL) when my group began its observations of the Sun using Geiger counters carried aloft by the rebuilt V-2s. With them we were the first to discover X-rays from the Sun.

Growing up I was surrounded by art, music, and literature. When I entered college there was no suggestion that I would end up a scientist. I think my orientation towards the arts gave me a subliminal fascination with beautiful devices. I’d never thought about space travel, and I didn’t know enough about physics to realize what kind of excitement lay ahead. The rocket changed the course of my life.