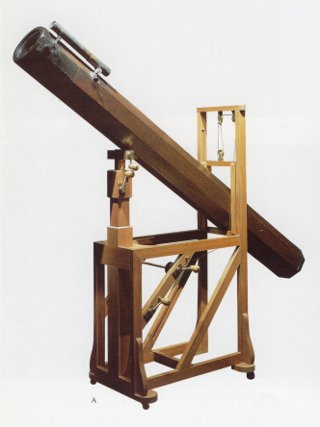 Herschel Reflecting Telescope: One night, using a reflecting telescope of his own design, William Herschel discovered an object moving across the sky. He first thought the object was a comet, but later discovered it was in fact a new planet that he would name Georgium sidus after King George III; astronomers would rename the planet Uranus, 50 years later. Without the high quality he achieved with his telescopes, a quality that far surpassed anything that had been accomplished before, he would not have been able to discover Uranus.
Credit: Adler Planetarium & Astronomy Museum

In the mid 1600s, Isaac Newton was studying light and found that the bands of color plaguing early astronomers were formed from light passing through a lens or a prism. He came to the conclusion that white light is really a mixture of light of different colors. When light passes through a prism the different colors separate and are discernible. The same thing happens with a lens but to a much lesser degree. Newton thought that it would be impossible to get rid of chromatic aberration as long as lenses were used in telescopes.

Newton started working on another type of telescope that he thought should get rid of chromatic aberration. Instead of using a lens to focus the light from a star, Newton used a mirror. He experimented with different metals and polishing methods and made his first reflecting telescope in 1668. Newton was not the only astronomer to think of building a telescope with a mirror, but he was the first to produce a working reflecting telescope. His telescope was shown to the Royal Society of London, one of the most distinguished organizations promoting science. The demonstration was so successful that Newton was elected to membership to the Royal Society immediately. One hundred years later, my own brother William would also be admitted to the Royal Society when he discovered Georgium sidus using a telescope based on Newton’s design.

Reflecting telescopes proved difficult to construct. The mirrors were hard to polish to the proper shape. It was fifty years before another member of the Royal Society, John Hadley, improved the mirror by making it have a parabolic shape instead of Newton’s spherical shape. A parabolic mirror is able to focus all of the light to one point and thus provides a crisper image than does a spherical mirror. I know about this parabolic shape, as it is the design my brother used in making his own telescopes. There were times when I had to actually put food into William’s mouth because he could not stop grinding and polishing a mirror to eat. One time he was at it for sixteen hours straight.