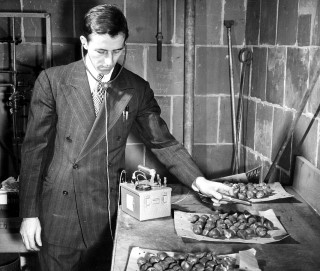 Geiger-Muller Counter in Use at Argonne National Laboratory: Prior to planting, tulip bulbs are checked for radioactivity. Dr. Norbert J. Scully, Chief of the Argonne Laboratory's Radiology Experiment Station, is shown in 1949 as he detects and measures the degree of radioactivity remaining in the bulbs [with] a Geiger-Muller counter.
Credit: University of Chicago Photographic Archive,apf2-00475, Special Collections Research Center, University of Chicago Library

I’m Warren Moos and I’m an astrophysicist now, but I did not spend all of my youth watching the stars. I did belong to an astronomy club in high school, and it had a big influence on my going into science, but I started out as a physicist.

In high school I always participated in activities that involved science rather than engineering. At least, I see it that way now; I didn’t think about the difference between the two fields then. Some of the things I was doing were very technically challenging. When I was a senior, I set out to build a Geiger counter radiation detector. I was not completely successful, but I did get as far as building the high voltage power supply. Let me explain. This was the 1950s: where was I going to get a high voltage supply? It was not an easy thing to get in those days. I could not just go out and buy it. What I did is hook up a spark coil, the type that was used in very old automobiles (you can’t buy them anymore), and I powered the spark coil with a homemade device that modulated the current from a DC source. Using a vacuum diode, I built an electric circuit that produced 2,000 volts and stored it on a capacitor.

So was that engineering, or was that science? The point is that I was trying to build a scientific instrument, even at that age. I was fascinated by the unknown from an even earlier age.

In my senior year of high school, I asked my father the question: should I go into engineering, or should I go into science? I’m not sure he really saw the issue the way I’m discussing it now, but he looked at me and thought, he doesn’t look like the practical type, this kid’s going to end up as a professor. So he answered, “Yeah, I think you ought to go into physics.” At the time, I was deciding between studying engineering and physics. I chose physics, and I think it was a good choice.