Rockets to the Moon 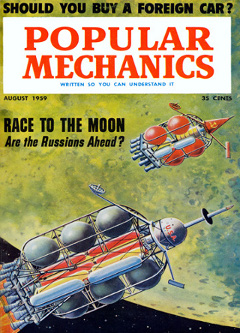 Race to the Moon: This Popular Mechanics magazine cover from 1959 asks if the Russians are ahead in the space race. Many newspapers and magazines of the time devoted covers to imagining a future where space travel to the Moon was possible.
Credit: Popular Mechanics

I was born in London in 1932 and grew up during the Depression. World War II began just before my 7th birthday and my sister and I were evacuated out of London because of the bombs that would be dropped on the city by Germany. We didn’t quite understand what was going on -- Britain thought that bombing was a more precise thing in those days, but we discovered that German planes would just fly over the right country, drop their bombs, and get away as fast as they could. As you can imagine, my schooling was erratic during the war because my family was always moving. The war ended in 1945 and my family was finally able to move back to London in 1947. It was only then that my schooling would get back to normal.

I started reading very early and was given a lot of freedom to read whatever I wanted. I remember one book in our house called An Outline for Boys, Girls, and Their Parents and it was about everything. It did include quite a bit of science in it, and I was certainly very interested in that. I remember travelling on the London Underground before World War II and I saw somebody with a newspaper that had an article showing a concept of people going in a rocket ship to the Moon. That made a huge impression on me at the time.

The schooling system was very streamlined in that, even at the age of eleven, you were selected to be put into a stream with the possibility of going to college, or you would be put into a technical school. In 1943, I got into the “college” group. Despite my early interest, I never thought that I could actually be a scientist. I grew up thinking that my responsibility was to earn a living and that only rich people who did not need to earn a living were astronomers, archaeologists, or paleontologists. It was not until a high school chemistry teacher began talking about how you could go to college, get a bachelor’s degree, then a master’s degree, and then you would be able to go into the chemical industry and earn a good living. I suddenly appreciated that there were possibilities of being a scientist!