It Started with Mathematics 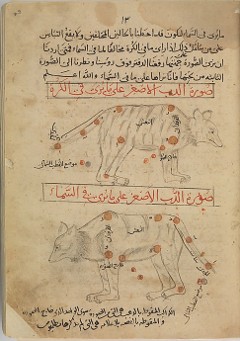 Illustration from the Kitab suwar al-kawakib al-thabita (Book of the Images of the Fixed Stars) of al-Sufi: The Kitab suwar al-kawakib al-thabita of al-Sufi based on the Almagest of the Greek astronomer Ptolemy, concerns the forty‑eight constellations known as the Fixed Stars, which, according to the medieval conception of the Universe, inhabited the eighth of the nine spheres surrounding the Earth. The constellations each appear twice in mirror image, shown as observed from the Earth and from the sky. This manuscript in Arabic is from the late 15th century and represents the work of `Abd al-Rahman al-Sufi (903–986).
Credit: Image courtesy of the Metropolitan Museum of Art (http://www.metmuseum.org/)

I am Mike Shull and I am an astrophysicist at the University of Colorado, Boulder. I lived in North Dakota and St. Louis, Missouri, before graduating high school. Growing up in the Midwest, I learned all the names of the stars in Arabic from my dad. He was a navigator on B-17 and B-29 bombers in World War II, so he knew dead reckoning and all the names of the stars. I learned the stars from him, but at the time I never thought I'd be an astronomer decades later. As a kid, I was not an amateur astronomer at all; however, I was interested in mathematics.

It was at Princeton that I started working in high-energy physics and particle theory. On a whim, I thought that I'd take some classes in astrophysics because there were some very well-known scientists there, in particular Martin Schwarzschild and Lyman Spitzer. From them I discovered that astrophysics is such a broad field because I could use all the branches of physics: particle, nuclear, atomic, and solid state physics, as well as optics.

I ended up working on my thesis with Lyman Spitzer. My research began with some theoretical issues and used data from the satellite project he headed at the time, Copernicus. This was around 1974 or 1975; Don York was on the Copernicus team at the time and supervised some of my work with the data. They had all this new data: ultraviolet spectroscopy of the gas between the stars. It was a chance to learn an awful lot of atomic and molecular physics and about the scientific interpretation.