The Stirrings of War

As a scientist I’ve usually worked on problems that others haven’t considered. Such problems can often be solved if you are willing to work hard to invent new tools for tackling them. Powerful new tools help us view the universe in an entirely new light.

My name is Martin Harwit. I am a retired Professor of Astronomy (emeritus) at Cornell University in Ithaca, New York. 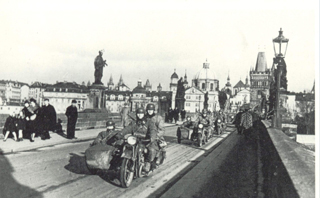 Fortunately, at that time, a newly created University of Istanbul in Turkey was systematically attracting the best German and Central European university professors who were facing Nazi suppression. As part of this policy, Turkey offered my father a professorship to direct a biochemistry research laboratory and teach biochemistry to medical students in Istanbul.

On March 15, 1939, a few days after my eighth birthday, Germany occupied the whole of Czechoslovakia, including Prague. But despite the occupation, my parents, my sister, and I were able to leave the country two weeks later by train to Istanbul. The country’s borders were not completely sealed --- yet.

My father had been reluctant to leave because he felt loyal and didn't want to abandon his country at a time of need. A lot of people felt they ought to stay, rather than leave. But in September 1939, Germany invaded yet another country, Poland. This started World War II. None of our relatives who had stayed behind in Czechoslovakia survived the War. Some died of natural causes; many perished in concentration camps.