HISTORY: Stirling Colgate helped monitor nuclear bomb blasts, which led to the first discovery of Gamma Ray Bursts, the most powerful explosions known in the Universe. 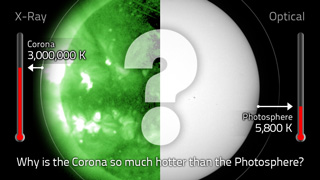 Coronal Heating Problem: Comparing X-ray and Optical images of the Sun (left and right respectively) reveals that the Corona is millions of degrees hotter than the Photoshpere. Sixty years after the discovery of solar X-rays, astrophysicists are still trying to figure out how magnetic fields make the extended gas around the Sun (the Corona) hotter than the surface.

A simple idea underlies the need for Multiwavelength Astronomy: the Universe cannot be understood if only part of it can be seen. For thousands of years astronomers developed theories from a limited set of data based on what the human eye can see, which is a tiny fraction of all the light and radiation emitted in the Universe.

In the beginning of the 17th century, the invention of the telescope slowly extended our view of the cosmos as astronomers discovered countless other planets, moons, stars, and galaxies. However, just looking at the visible light in the Universe does not provide enough evidence to answer basic questions.

How are stars created? What fuels stars to burn and shine for billions of years? 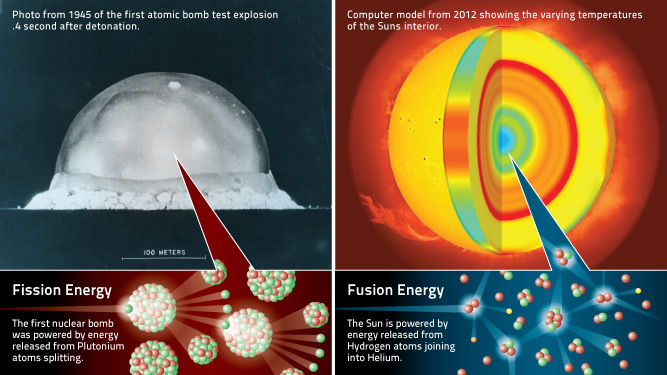 Nuclear Fission & Fusion Energy: Physics experiments and theories in the early 20th century revealed that enormous energy could be released from atoms splitting apart or fusing together in chain reactions. The photo on the left captures the first nuclear fission bomb 0.4 of a second after it exploded. A sphere of plutonium no bigger than a basketball created a chain reaction of atoms splitting, releasing enough energy to destroy a city in the blink of an eye. The illustration on the right is from a 21st century computer model revealing how the core of the Sun is heated to 15 billion Kelvin by fusion energy released from Hydrogen atoms combining to make Helium in a chain reaction lasting billions of years. The temperature of the Sun increases going inward.