On the banks of the Kaskaskia

Cahokia Mounds: An artist's illustration of the village as it may have existed at Cahokia. Located southwestsoutheast of Shelbyville near the Illinois, Missouri border, Cahokia was inhabited by a number of peoples for more than 400 years.
Credit: Cahokia Mounds State Historic Site, painting by William R. Iseminger

I am Don York, a professor of astronomy at the University of Chicago, and the founding director of the Sloan Digital Sky Survey (SDSS).

I was born in Shelbyville, Illinois and I’ve lived within 200 miles of Chicago my whole life except for when I was a student at the Massachusetts Institute of Technology (MIT) and then when I was a post-doc at Princeton. My father passed away when I was 8 and my family moved to Terra Haute, Indiana to be closer to my grandmother.

I don’t remember many hobbies from my childhood, but I do remember that when I lived in Shelbyville, a small town on the banks of the Kaskaskia River, I would search for arrowheads in the river banks. I was fascinated that a whole different culture had lived here before us. This was one of my first major experiences with curiosity. 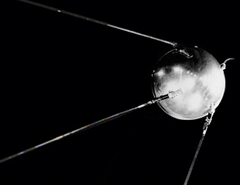 Sputnik: The Soviet Union launched Sputnik 1 on Oct. 4, 1957. The world’s first artificial satellite, Sputnik 1 was a 183-pound beach ball-sized sphere that took about 98 minutes to orbit Earth. The launch of Sputnik marked the start of the space age and the U.S. – U.S.S.R. space race.
Credit: Jet Propulsion Laboratory

My first distinct memory of wanting to be a scientist was hearing on the radio that the Russians had just launched Sputnik. I was on a date with a girl at the time. Sputnik was a national moment, one that lives in the memories of many Americans. Prior to this moment, I had filled out many forms asking the question: "What do you want to be when you grow up?" I had provided many answers...football coach, airline pilot, all sorts of things. After learning about Sputnik, I knew that I was going to try to be a scientist, though I did not understand at this point what it meant to try...I just knew I was going to be a scientist.

I took science and math courses in high school and then I went to MIT for college where I majored in physics. When it came time for graduate school I applied to a number of schools in physics and at the University of Chicago (UC) one of the professors saw that my undergraduate senior thesis was in astronomy and sent my application to the astronomy department. That is how I ended up in graduate school in Astronomy at the UC.