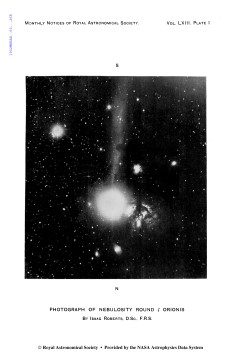 Horsehead Nebula, 1900: The Horsehead nebula is a dark interstellar cloud of dust and non-luminous gas situated 1,600 light years away in the direction of constellation Orion. This photographic image was made on January 25, 1900 by Isaac Roberts (1829-1904), an amateur astronomer.
Credit: Royal Astronomical Society, Provided by the NASA Astrophysics Data System

I, Riccardo Giacconi, was born in Genoa, Italy, on October 6, 1931. My parents separated when I was five years old. I lived with my mother in Milano, where she was a high school teacher of mathematics and physics and the author of many textbooks in algebraic and projective geometry. My mother believed that geometry was God’s entertainment, and I absorbed some of her love for it. I saw my father from time to time. He had been an artillery spotter in World War I. He hated war, was an anti-fascist, and was intrigued by technology.

I was a gifted child but very upset by the break-up of my family and the horrors of World War II. Typically I could achieve the highest marks in school but was often in trouble for not studying at all, or for disciplinary problems. I completed high school a year earlier than usual and chose to study physics at the University. I would have preferred architecture, which I loved and still do, but I did not feel creative enough. At the University I met one amateur astronomer and I remember seeing the Horsehead Nebula through his home-built telescope. I must confess I was unimpressed and thought at the time that astronomers were more like botanists rather than real physical scientists.

The most profound inﬂuence in my training came from Giuseppe Occhialini. He was a far cry from the usual teacher in my rather provincial physics department. To my recollection Occhialini never gave a lecture, but his profound intuition, search for excellence and integrity in research, and technical ability could almost be learned by osmosis. He took a liking to me, encouraged me to apply for a Fulbright Scholarship, and told me, “Go West, young man,” a phrase from his favorite cowboy movies.