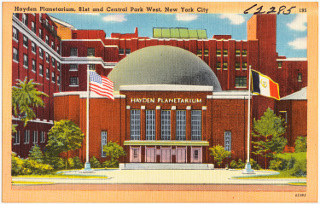 Hayden Planetarium: The Hayden Planetarium is part of the American Museum of Natural History in New York City. A planetarium us a theater built for presenting programs about the night sky or the cosmos.
Credit: Courtesy Boston Public Library, CC BY 2.0

My name is John Mather. I work in the Observational Cosmology Laboratory at NASA's Goddard Space Flight Center, and I am currently the Senior Project Scientist for the James Webb Space Telescope, which I will tell you more about later.

While growing up in a rural area of New Jersey, I was always interested in scientific questions. My parents read aloud to my sister and me from biographies of scientists like Galileo and Darwin. They took us to the Museum of Natural History in New York where we saw the planetarium show and dinosaur bones and all kinds of amazing things. We played with science-related toys, too. I had an erector set with little pieces of metal and gears and motors for building machines that could move and do things. That’s how I spent my early childhood. Just having things to play with was partly the beginning of my scientific career.

My childhood was unusual, but certainly it gave me an interesting place to start. In those days, I was one of the few kids I knew who was interested in science. Most of my neighbors were farm kids who spent their entire waking lives doing things on the farm. I was among the slightly weird, “different” people who liked science.