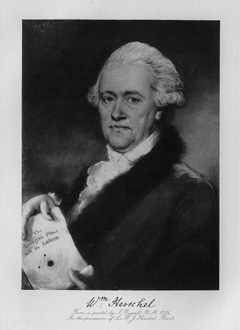 Sir William Herschel was the greatest of telescope makers and astronomers. He found the first planet since the discovery of Saturn thousands of years ago; he also discovered more nebulae than anyone before him. And he constructed the best telescopes ever made. I know all of this because I was his astronomical assistant. My name is Caroline Herschel and William was my older brother.

I was born in the independent city of Hanover in March of 1750. Hanover was located in the part of Europe that today is called Germany, but we were actually an independent state politically linked to Great Britain. For much of my childhood our city was involved in different wars, especially with France. This constant going off to war affected our family as my father, Isaac Herschel, and later my older brothers had to leave to be musicians in the Hanover army. Eventually two of my older brothers left for England to avoid war.

Father felt strongly that his ten children, four of whom died in childhood, should be educated, but my mother wholly disagreed, especially for girls. She felt education was useless and indeed dangerous and would not let me be schooled. Instead she wished me to know only that which would make me useful to the family. Still, father would give me violin lessons when mother was not around, and when I was fourteen he gathered us around a wash tub full of water in the courtyard so the whole family could watch a solar eclipse.