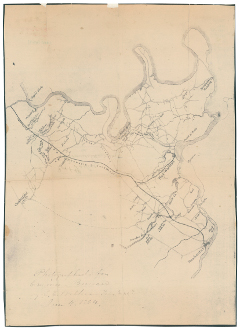 I grew up on a farm in Virginia, where my family settled in the early 1700s. Next to our farm was a general store that my great grandfather started in 1872 when he came back from the Civil War. My dad ran the store and I worked there as a kid. There was a lot to do on the farm, mostly putting up hay and tending the cattle. When things were slow I also worked on repairing farm equipment. It was a surprisingly good education.

My dad was very knowledgeable, and he was interested in science. He still knew all of his math from school, like doing longhand square roots, which no one was taught to do when I was a kid. I could usually ask him for help with a math question, and he would know how to do it. And he was always fixing things. When you’re fixing something mechanical, you need to think about the problem and take a fairly scientific approach to solving it or else you’re going to spend a lot of time doing the wrong thing. This sort of analytical approach to problem solving is something I learned at a very early age.

But fixing mechanical things isn’t only about problem-solving. It also gives you something to think about. How do things work? How should they work? How could they work? 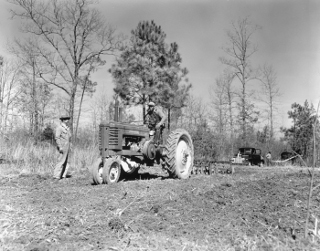 Preparing plant bed, tobacco series, Dinwiddie County: Modern farming requires machinery such as the tractor (foreground) and truck (background) seen in this image. Learning to use and maintain the equipment often spurs interest and expertise in how machines work.
Credit: Virginia State Chamber of Commerce photograph collection located in the Picture Collection at the Library of Virginia