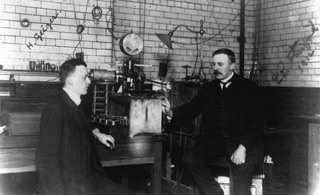 Before we knew about cosmic gamma radiation we discovered it through experiments carried out by Paul Villard and Ernest Rutherford. Villard was doing radioactivity research in Paris at the same time as Marie and Pierre Curie. Villard and Rutherford collaborated on separating radiation into alpha, beta, and gamma components, based on their ability to penetrate objects and cause ionization. Radium experiments showed that alpha-rays are stopped by paper, beta-rays are stopped by glass or aluminum, but gamma-rays pass through all substances except lead, concrete, steel, and the atmosphere of Earth. Villard also noticed that gamma rays traveled in a straight line and were unaffected by magnetism. This is because gamma rays are photons – particles with no mass and no charge – so they can’t be affected by a magnetic field.

Of course these experiments were done in extremely short distances compared to the vastness of space. Cosmic gamma rays travel billions of light years. As they approach Earth they are absorbed in the atmosphere. Gamma rays don’t reach the surface of Earth, thus we have to fly balloons or satellites to collect data on them – this is also true for X-rays. If you want to study higher energy phenomena, you have to go above the atmosphere because this type of radiation does not make it to the ground – directly. But more about that later.

Gamma-ray penetration of materials: Our atmosphere is too thick to be penetrated by gamma radiation. On the other hand, gamma rays can easily penetrate considerable distances in materials such as paper and aluminum. Only heavy metals (such as lead) and other materials like concrete can prevent deep penetration by gamma rays.
Credit: Courtesy of Ehamberg and Stannered on Wikimedia Commons, available under Creative Commons Attribution 2.5 Generic license.