This was a very important event in gamma-ray astronomy, as well as in my own family. My husband, Jan van Paradijs, a professor of astronomy at the University of Amsterdam and the University of Alabama in Huntsville, had graduate students in two different continents monitoring data coming in from BeppoSAX. When the exact location of GRB 970228 arrived on his student's computer in Amsterdam, it was the middle of the night (astronomers have unusual schedules!). Another student happened to be in the room and he remembered that a third student had recently joined astronomers at the Observatories on La Palma, one of Canary Islands archipelago. They were able to get through to Jan, who was teaching a class in Huntsville at the time. After a flurry of phone calls taking place across different time zones and all over the globe, the telescope at La Palma was pointed to the spot in the sky indicated by BeppoSAX. History was made! The optical images taken of GRB 970228 on February 28th, and again on March 3rd, are the most cited pictures in gamma-ray astronomy!

GRB 970228 became the turning point in gamma-ray astronomy. Once a few more GRBs were identified with a counterpart, we were able to put the Keck telescopes in Hawaii on the sources. We determined the redshifts of these events and established that they were cosmological in origin. Thus, multiple observations of GRBs at varying wavelengths finally answered the question of the distance to gamma-ray bursts. For this achievement, Jan and the BeppoSAX team were recognized with the 1998 Bruno Rossi Prize, given by the American Astronomical Society, to acknowledge a significant contribution to the field High Energy Astrophysics. 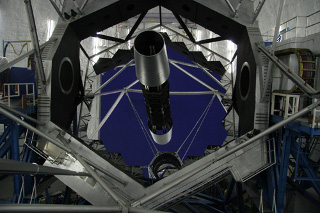 Keck Mirror Assembly: The twin Keck telescopes are located on Mauna Kea, a dormant volcano in Hawaii. The telescopes are among the largest optical and infrared telescopes in the world, with segmented mirrors that are made up of 36 hexagonal shaped mirrors each. Each 10-inch telescope stands eight stories tall and weighs 300 tons.
Credit: Courtesy W. M. Keck Observatory