A more complete picture of the Cosmos 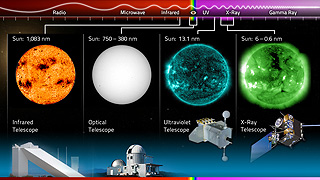 Multiwavelength Sun: Four images of the Sun taken in infrared, optical, ultraviolet, and X-ray. Also pictured are the telescopes that made the images in each waveband. Astrophysicicts use many telescopes designed to capture specific wavelengths of light to create a more complete picture of the Sun.

By the first half of the 20th century, new tools were created to view and measure invisible radiation for a more complete picture of the Universe. Rockets developed after World War II allowed a variety of space telescopes dedicated to scanning the sky in each spectral waveband. Meanwhile, bigger and more powerful ground-based telescopes continued to be developed. The technology explosion of the 20th century led to a series of discoveries that allowed physicists to develop a basic understanding of what is in the Universe, and of the physical and chemical principles by which it operates.

Astrophysicists are now using these techniques and theories to reveal how exploding stars (supernovae) produce all the elements found in our human bodies, how the first stars were formed in the Universe and how and when galaxies formed after the Big Bang. Data at different wavelengths reveals different physical properties of an object allowing us to form a more complete picture of the nature of the objects, including: highly condensed black holes, powerful jets of matter, binary stars that produce X-rays, and bursts of gamma rays that last only seconds. If our observations of the Universe involved only what we could learn from optical photons, we would have a completely incorrect knowledge of the Universe, even though we still have much to learn.

From observation to theory: The Crab Nebula is a gaseous nebula with a rapidly spinning neutron star at the center called a pulsar that looks very different when imaged in four separate wavebands. The middle image is a combination of optical, infrared, and X-ray images, which is known as a composite image. The X-ray image reveals evidence of a spinning disc of super hot gas with high speed jets shooting out in opposite directions of it. It is believed that the explosion of a massive star leaves behind a fast spinning neutron star that could produce this phenomenon. The computer model on the right demonstrates how the strong magnetic fields around a neutron star can create repeated flashes of high energy X-rays and gamma rays. Neutron stars that behave like this are called pulsars, phenomena that had not even been imagined until the advent of radio astronomy.