Three hundred years after the invention of the telescope, our ideas about the Universe were formed by only the visible light emitted from stars and the faint glow of dust clouds. In the first half of the 20th century, a rapid series of developments occurred that forced us to realize that there are other kinds of radiation that bring new messages from the sky. The atmosphere of the Earth blocks most of the invisible light from the Universe, so an array of new detectors sensitive to a variety of wavelengths were sent up above the ozone layer carried by balloons and rockets. 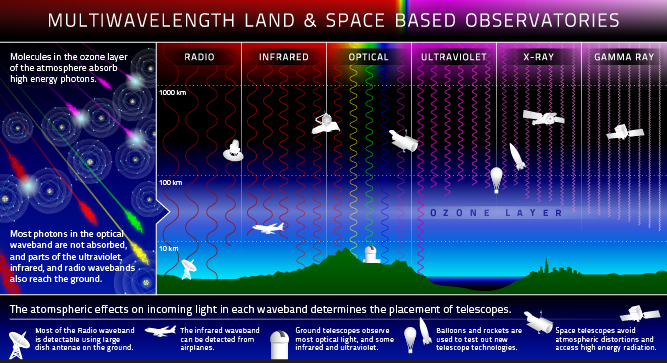 Multiwavelength Land & Space Observatories: The atmospheric effects on incoming light in each waveband determines the placement of telescopes.

In the second half of the 20th century, methods to focus and detect light at a variety wavebands were developed that enabled space telescopes to provide images of the invisible radiation from astronomical objects. As rocket and satellite technology improved, space observatories were built that carried an array of tools capable of capturing images and spectra at a variety of wavelengths. Communication systems were developed to share the images and data from land- and space-based telescopes allowing astrophysicists to compare images and spectra of objects and phenomena in as many wavebands as possible to get a more complete picture of the Universe.

Spitzer Space Telescope: Ten years after a Delta II rocket launched NASA's Spitzer Space Telescope, the fourth of the agency's four Great Observatories continues to illuminate the dark side of the cosmos with its infrared eyes. The telescope studied comets and asteroids, counted stars, scrutinized planets and galaxies, and discovered soccer-ball-shaped carbon spheres in space called buckyballs. Moving into its second decade of scientific scouting from an Earth-trailing orbit, Spitzer continues to explore the cosmos near and far. The five minute video clip emphasizes some of the discoveries of the Spitzer Space Telescope. Click the triangle to start the video. To access the audio, click the speaker icon. The double arrows in the lower right corner enlarge the video to full screen. The double bars pauses the video. Push the escape key on your keyboard to return to the lesson page. If a video is blank, refresh the lesson page.
Credit: NASA's Jet Propulsion Laboratory

The Camera that saved Hubble: NASA's Wide Field and Planetary Camera 2 has done more than take some of the most historic pictures of our cosmos during its 15 plus years in orbit – it saved the Hubble Space Telescope.
Credit: NASA's Jet Propulsion Laboratory

Looking Deep: In 1995 Hubble stared at a single, nearly empty spot in the sky for 10 days, gathering all the light it could. When it was done, scientists found they had snapped a picture of a multitude of galaxies stretching into the distance. Video controls are the same as for the Infrared Telescopes video.
Credit: NASA

Chandra - 15 Years and Counting: Celebrating 15 years of science with NASA's Chandra X-ray Observatory: Chandra allows scientists from around the world to obtain X-ray images of exotic environments to help understand the structure and evolution of the Universe. Video controls are the same as for the Infrared Telescopes video.
Credit: NASA/MSFC