The Big Bang theory states that the very early Universe was hot. In less than a million years the hot gas, consisting of mostly hydrogen atoms with no galaxies, stars, or planets, cooled. Unaffected by the temperature change was the mysterious dark matter, which existed in both the hot and cool phases of the early Universe. The dark matter clumped and pulled the cool gas into those clumps producing proto-galaxies, consisting only of gas and dark matter. All this happens because of gravity, the only force that acts over such large intergalactic distances. The same force of gravity continues to act on smaller scales and leads ultimately to the individual stars that make up the galaxies we see today.

The image above illustrates a section of our Galaxy. The clumping on the largest scales continues on smaller scales within a galaxy. This part of the process still goes on today. As the clouds get more massive and dense, gravity forces them to collapse further. Eventually a new star is formed. Further collapse occurs leads to heating, which eventually forces the atoms in the core of a new star to fuse hydrogen nuclei into helium, releasing tremendous amounts of energy that will fuel the star for billions of years.

The Four Fundamental Forces of Nature

The long-range force of gravity regulates the motion of planets around stars, stars around the center of the galaxies, and the random motion of individual galaxies. The other fundamental forces work at tiny atomic scales. The strong and weak nuclear forces enable nuclear fusion combining protons and neutrons to create all the elements of the periodic table. The electromagnetic force captures electrons in orbit around atomic nuclei allowing atoms and molecules to form, as well as providing the mechanism for generating light and invisible radiation across the electromagnetic spectrum. 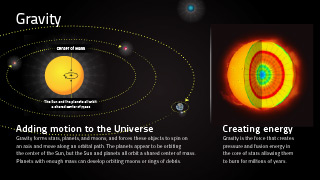 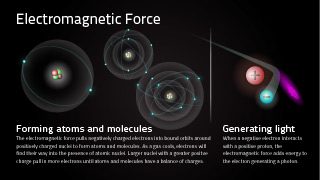 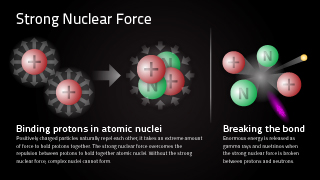 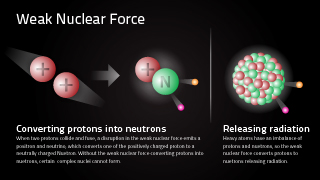 Radiation from space can help us understand how stars form. Different elements show different signatures in astrophysical spectra. Interpretation of these features can provide significant information on elemental abundances and on the density and temperature of the gas. This information allows us to reconstruct the different stages in the formation of stars: interstellar dust clouds, forming stars, evolving stars, and dying stars.