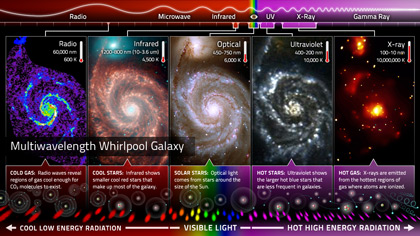 Multiwavelength Whirlpool Galaxy: Each image shows a narrow band of wavelengths of light and invisible radiation across the electromagnetic spectrum. The wavelength and energy of a photon relates to how fast electrons are accelerated. Low energy radiation comes from cool regions of molecular gas, and high energy radiation comes from hot spots where atoms are fully ionized. The combined images provide insight into the structure, temperature, and chemical composition of the Whirlpool Galaxy. The stars in the infrared image represent most of the mass of the galaxy, excluding dark matter, which can't be seen. The optical image represents a slightly smaller amount of mass and the other three images represent only traces of mass in molecules (radio image) massive hot stars, (ultraviolet image) and hot plasma (x-ray image).

Gravity is the force that pulls matter together over great distances (tens of millions of light years). The electromagnetic force is also very influential, but it works at very small distances (down to submillimeter scales) causing positively charged atomic nuclei to attract negatively charged electrons allowing atoms and molecules to form.

The electromagnetic force is responsible for generating visible light as well as radiation in other wavebands not detectable by the human eye. As electrons and protons fly around bumping into each other in a light source, the electromagnetic force produces photons of all wavelengths across the electromagnetic spectrum. Slow, randomly moving charged particles create radio, infrared, optical and ultraviolet photons with wavelengths, respectively, from meters to microns to thousands of nanometers to hundreds of nanometers. Fast moving particles may create X-rays. These forms of radiation are refered to as thermal radiation because the energy of the photons depends on the temperature of the gas. Other processes such as directed motion of charged particles in magnetic fields or decays of particles into photons create additional radiation that is refered to as non-thermal radiation because the main cause of the radiation is something other than the temperature of the gas. It is often difficult to say how a particular photon is created because they have similar wavelengths. The highest energy radation, known as gamma rays, is usually non-thermal radiation. 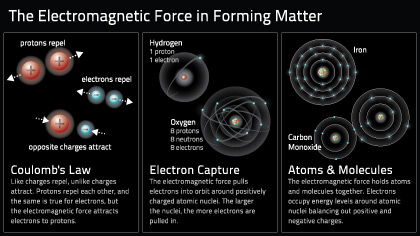 The Electromagnetic Force in Forming Matter: Electromagnetism is the force exerted between electric charges on one another. Protons and electrons are oppositely charged particles that react to both electric and magnetic fields. Without the electromagnetic force, atoms and molecules would never form.

Electromagnetism is the force exerted by charged particles on one another. Electrons and protons are oppositely charged particles that react to both electric and magnetic fields. When the electromagnetic force causes electrons to speed up or slow down, the Law of Conservation of Energy requires that there be an equal and opposite amount of energy added or subtracted so the net change in energy for the system is zero. In other words, energy appearing or disappearing in one form must appear or disappear in another. Higher energy photons are associated with higher frequencies than shorter wavelengths. Photons are the smallest particles of light. Photons come in a continuous range of energies from low to high, which are each associated with a unique wavelength and frequency. 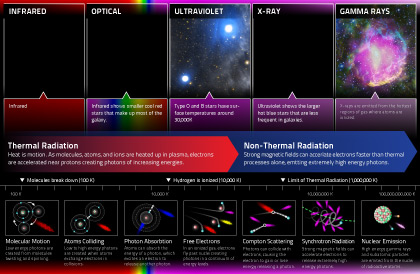 Multiwavelength Whirlpool Galaxy: Each image shows a narrow band of wavelengths of light and invisible radiation across the electromagnetic spectrum. The wavelength and energy of a photon relates to how fast electrons are accelerated. Low-energy radiation comes from cool regions of molecular gas, and high-energy radiation comes hot spots where atoms are fully ionized. The combined images provide insight into the structure, temperature, and chemical composition of the Whirlpool Galaxy.

The Universe is mostly made of hydrogen gas. All other elements in the periodic table make up a small fraction of the matter in outer space. As gravity pulls clouds of gas together, the particles of gas are accelerated and come into more and more contact with each other. This raises the temperature of the gas and increases the output of light from interacting particles. The characteristic wavelength of the emitted radiation becomes bluer and bluer as the gas becomes hotter and hotter. This is known as thermal radiation. From the coolest dimly glowing clouds of gas to the hottest brightest stars, most of the light in the Universe is the result of thermal radiation emitted from electrons being accelerated near protons.

When the temperature of a gas rises over a few thousand degrees Kelvin, the electromagnetic force holding electrons to atomic nuclei breaks apart, and electrons are set free to fly around. This is called ionization, and most of the Universe is made up of ionized gas with lots of free electrons and protons flying around each other. Ionized gas is referred to as plasma. Plasma is different from other matter in that the free electrons give plasma electromagnetic properties. Neutral gas has only gravitational properties on a large scale, which is also true of dark matter.

Over 10,000,000 Kelvin, all the atoms in hot plasma are ionized, and thermal energy reaches its peak output and magnetic forces take over. Non-thermal radiation comes from free electrons racing along magnetic field lines near the speed of light. When electrons are accelerated to great speeds by powerful magnetic fields, high-energy X-ray and gamma ray photons are released at energies greater than thermal processes could ever produce.

Fermi Proves Supernova Remnants Produce Cosmic Rays: Exploding stars and their remnants have long been suspected of producing cosmic rays, some of the fastest matter in the Universe. Where and how these protons, electrons and atomic nuclei are boosted to such high speeds has been an enduring mystery. Now, observations of two supernova remnants by NASA's Fermi Gamma-ray Space Telescope provide new insights.