A Change of Plans, and the Genesis of the Cosmic Background Explorer Satellite

I left Berkeley after having written a report that mainly described the failed apparatus. I thought, “Oh, this is too hard. I’m not going to do this anymore.” Then I got a position in radio astronomy at a NASA laboratory in New York City. That was my next step--I was going to escape. I wasn’t going to try to measure the CMBR anymore, or so I thought. I had been in my position for about six months when NASA announced an opportunity calling for new science mission proposals. This was 1974, just five years after the Moon landing.

I told my advisor, Pat Thaddeus, that my project didn’t work but it could have been successful if it have been done in outer space, where the backgrounds would be lower. Basically, my Berekeley project became NASA’s Cosmic Background Explorer (COBE) satellite. Launched in 1989, COBE was a roughly two-ton satellite, about the size of a small car. The telescope in it was fantastically cold to keep the light from the telescope from outshining that of the CMBR. The four-year mission measured the heat left over from the giant explosion that created the Universe, and thereby provided evidence supporting the Big Bang theory of the origin of the Universe. In 2006 I shared the Nobel Prize with my collaborator, George Smoot, for our measurement of this heat radiation. We discovered that it looked like most of the Universe was at exactly one (very low!) temperature: only 2.7 degrees above absolute zero. We also saw how it looked pretty much the same in all directions, confirming that it is really cosmic and not coming from any local objects like galaxies. Then when we looked very very closely we saw that it does have very faint hot and cold spots, only 30 microkelvins above or below the average temperature. These were also predicted from the Big Bang theory, also known as the expanding Universe theory, because as far as we can tell, the galaxies could not have formed unless there were primordial seeds in the right sizes and places. The early Universe is popularly described as an explosion, but that is a misleading word because it reminds us too much of a firecracker. We actually mean that the entire, possibly infinite Universe was much more compressed when it was young, and has been expanding and cooling ever since. There was not a first moment of time either, there were just moments of time closer and closer to the unknowable beginning.

Looking back at my failed experiment that led to the COBE satellite that followed from it, I realize that you cannot always see where you’re going. You do not know what’s important. The things that are too hard for you might also be the most important. I look at this with amazement, and I’m very thankful for the people who pointed me in these various directions. 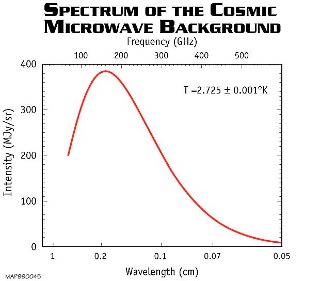 Spectrum of the Cosmic Microwave Background: The energy distribution in the cosmic microwave background radiation, as determined by the COBE satellite. The shape of the curve is that of a classic black body, the spectrum of any uniform black object at a given temperature. The only change is in the intensity, which depends on the position of an observer relative to a given black body, and the wavelength of the peak of the radiation, which is proportional to temperature of the body (in this case, 2.7 degrees Kelvin). At a given time in the Universe, the temperature is uniform to a very high degree, but at earlier times, the entire Universe would have a higher temperature and at later times, it will have a lower temperature.
Credit: NASA/COBE