The Surprises of Nature

In many ways our science questions have been propelled by the surprises of nature. We didn’t know what we should look for, and we found the most amazing things. Very small, not very sensitive telescopes were able to see the distant galaxies in the infrared. This was also not expected. 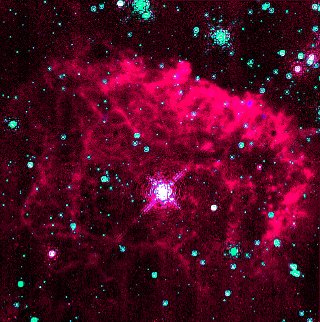 Pistol Nebula: One of the brightest stars in the Milky Way Galaxy, the bright, white dot at the center of this image, remained hidden behnd clouds of dust at the galactic center. Hubble's Near Infrared Camera and Multi-Object Spectrometer (NICMOS) was able to penetrate the dust with its infrared vision and reveal the star that is as bright as 10,000,000 suns.
Credit: NASA and Don F. Figer (UCLA)

One of the big surprises we found in the infrared was that huge dust clouds surround some stars. It turns out some galaxies are so full of dust and dirt that almost all of the starlight has been absorbed, but we can detect it in the infrared light that comes from the warmed dust. There are some galaxies that are a hundred or even a thousand times brighter at infrared wavelengths than they are at visible wavelengths. If you look at the Milky Way in a nice dark place in the summer, you will also see the dust lanes that run through it. Infrared astronomy has enabled us to see through these clouds of dust to see what is really there. The infrared waves are longer and can go around the dust grains, instead of bouncing off them.

We now have a view of our own Galaxy that is completely and radically different than the one we had before, using only visual light. That was revolutionary and beautiful. We found there are stars that have a lot of dust right close by them, so it tells us something about whether there could be planets there. People wondered if there were planets orbiting around those stars as well, and that prompted us to start thinking differently about planets. Now we know that there are as many planets as there are stars. That’s pretty exciting! Infrared astronomy also tells us a lot about chemistry. When we point our telescopes at planets in the solar system, we can learn about the chemistry of the atmospheres of Venus, Mars, Jupiter, and Saturn using the fact that molecules absorb and emit infrared light in very special ways. We also learn about the chemistry of the clouds in space out of which stars and planets form. It’s part of our analysis kit to learn about everything.

These are just a few examples of some of the astonishing things that new technologies helped us find. The Universe is strange and full of surprises, and if we can build better equipment, we will find more. We’ve got thousands of astronomers, all looking for a way to make a discovery, and thinking, “If I could put this tool and that tool and that tool together, I could study this.” You use what tools you can get your hands on, and sometimes develop your own, to answer these important questions.