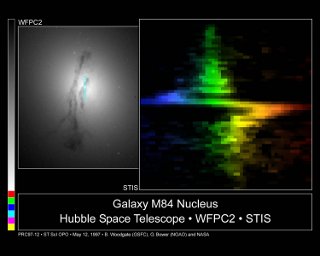 Hubble Detects a Black Hole: A black hole is detected by its effect on the matter that surrounds it. The STIS spectrum on right reveals rapid star motions at the galaxy center, indicative of a supermassive black hole. The motions are revealed by the extreme blue shift above the mid-point of the image and the red shift of the spectrum just below the mid-point of the image.
Credit: Gary Bower, Richard Green (NOAO), the STIS Instrument Definition Team, and NASA

The James Webb Space Telescope is named after the second NASA administrator who served from 1961-1968, a very important era in America’s space program. As the successor to the Hubble Space Telescope, the JWST will be a bigger, and much more sensitive instrument for infrared studies in cosmology. It will be a cold telescope that will sit very far from Earth, about a million miles away. (If you want to keep a telescope cold, then you want to keep it as far away as possible from sources of heat, and the Earth is a huge source of heat.) It will be so large that it will have to unfold to be focused after launch. The JWST will detect wavelengths from from 0.6 to 28 microns. The long wavelength limit of 28 microns allows the telescope to detect normal galaxies whose spectra are red shifted by the expansion of the Universe by factors of up to ten. The continous wavelength coverage between 0.6 and 28 microns allows the telescope to detect galaxies at all red shifts in between zero and ten. Such objects are extremely far away and their light has been stretched as the Universe expands, and so are very faint. The sensitivity is such that if there were a bumblebee as far away as the Moon, you would be able to detect the heat from that bumblebee. That’s just an example of how amazing the possibilities are for the telescope and our expectations that incredible new things will be found with its capabilities.

Of course, the most important discoveries from Hubble were in many cases the ones that no one even anticipated because they weren’t looking for them. For instance, with the Hubble Space Telescope we discovered that there is a black hole in the middle of every galaxy. That was a pretty big surprise. We still don’t know why that is, but we know that they are there. We can see matter emit radiation as it falls into a black hole, even though we can’t see the black hole itself. One of the questions people will be working on with JWST is How did we get a black hole in the middle of every galaxy? How early in the history of galaxies did that happen? These are hugely challenging questions. We would, of course, also love to know much more about planets. As of 2014 there were just under 2000 exoplanets in the catalogue, and some of them are good targets to follow up with a telescope. I think there will be discoveries made there, too, I just can’t tell you what they will be.

The JWST mission is a wonderful international partnership program led by NASA, with contributions from the Canadian Space Agency and the European Space Agency. We have assembled a brilliant team of engineers to develop all the inventions needed so that we can go forward despite tremendous challenges. We have a huge community of astronomers about 10,000 who are all planning to use this observatory. The whole project is a remarkable effort, but I would say tremendous credit goes to the visionary people who wrote the committee report in 1995, when they said this is what we should do because it is so important. We knew that it was really scientifically significant, even if it was really difficult, and we on the NASA team are very proud to carry this project forward for the benefit of the public.