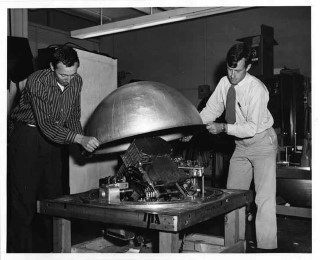 In 1956 William Kraushaar and I discussed the possibilities of a search for the high-energy photons, i.e. gamma rays, that we knew must be produced when cosmic rays collide with the atoms of interstellar gas and dust in our Galaxy, which we see edge-on as the Milky Way. Since a photon is not deflected by a magnetic field, its arrival direction reveals where it comes from. The challenge was to make an experiment with sufficient sensitivity to detect what we knew was a very rare component of the primary cosmic radiation. We tried a couple of balloon experiments that failed on account of the high rate of background events caused by radiation generated in the remaining atmosphere above.

Then came Sputnik, the first artificial satellite, launched by the Soviet Union in October, 1957. Soon the U.S. established the National Aeronautics and Space Administration (NASA) and made satellite vehicles available for scientific experiments above the atmosphere. Kraushaar invited me to join him in a proposal to NASA for a high-energy gamma ray telescope on a satellite. With quick approval and funding, we built five copies of a gamma-ray telescope in our cosmic ray laboratory, one each for shake testing, environmental testing, calibration, flight, and flight-backup. The telescope was an arrangement of scintillation detectors and a directional Cerenkov counter that could detect gamma-ray photons with energies above 50 MeV (50 million eV) arriving from a wide field of view. It was launched on 27 April 1961 as Explorer 11, the world’s first orbiting astronomical observatory. It worked for several months, scanned the entire sky, and yielded 31 "gamma-ray signature events" that we believed were probably produced by cosmic gamma rays. However, they were too few to pass the critical test of authenticity, which was a statistically certain concentration of arrival directions from the Milky Way.

Artist’s Impression of the Explorer 11 in Orbit: Explorer 11, the first gamma-ray detection satellite flown, was launched on April 27, 1961. The satellite could not be actively pointed, so it was put into a tumble in order to get a "rough" scan of the entire celestial sphere.
Credit: NASA 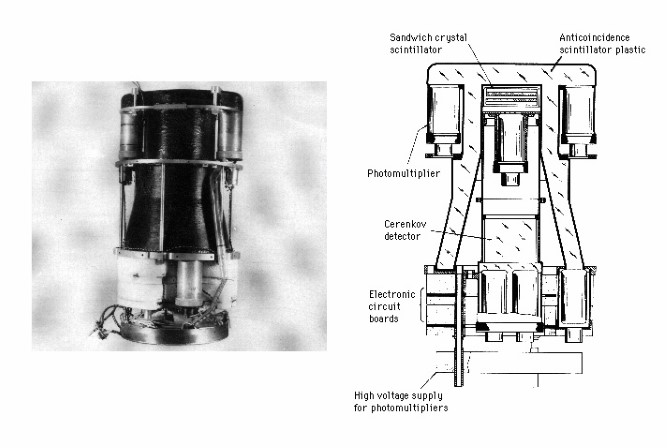 Explorer 11 Detector: Kraushaar and Clark’s detector for Explorer 11 was designed to detect gamma rays above 50 MeV. The image on the left shows the detector. It measured 20 inches high, 10 inches in diameter, and weighed about 30 pounds. The image on the right is a diagram of the detector, which consisted of a sandwich crystal scintillator and a Lucite Cherenkov counter, surrounded by a plastic anticoincidence scintillator.
Credit: NASA