Growing up in Turkey in World War II

Many scientists recall that when they were 8 or 10 years old they decided they would become astronomers or chemists or medical doctors. Somehow, I don’t remember thinking about it at that age. I was more interested and active in sports — swimming, or soccer at school.

At bedtime, my father would often come into our room, to chat with my sister and me just before we fell asleep. Sometimes he would tell us about the biochemical problems he was trying to solve, and why they were puzzling. The way he described it, his life in science was a wonderful adventure. I would have liked nothing better than a chance to do the same someday. But I could find no connection between his work and our science classes at school, which dealt mainly with facts to learn for an upcoming test --- on which I never did well. Science just wasn’t appealing. 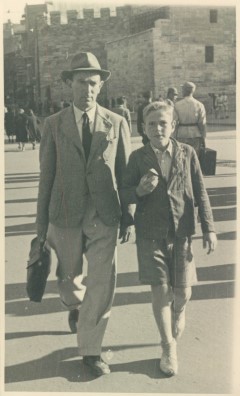 Martin Harwit with his father in Istanbul in the early 1940s
Credit: Photo courtesy of Martin Harwit

Though we feared a German invasion, Turkey remained neutral in World War II. My parents hoped to move to the United States after the War, and enrolled my sister and me in schools where lessons were taught in English in the mornings; afternoon classes were held in Turkish, with French taught in between. On returning home from school one evening in late February 1946, my mother told my sister and me that we were leaving for America in a few hours. This soon after the War, regular passenger service did not yet exist. But a US Merchant Marine ship passing Istanbul on its way home from Russia had just decided it was willing to take us along.

I turned 15 during the month’s journey to New York. My father could not join us in the US until he found a new position at the University of Indiana --- which took another two years to arrange. Travel was difficult in those days, and we saw each other only once during the two years.