The Chemistry of Interstellar Gas 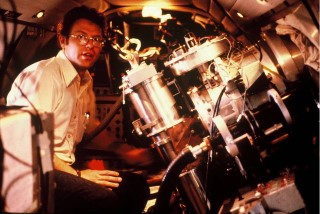 Infrared Spectroscope: Ray W. Russell, a member of the Cornell research group, around 1980, with an infrared spectroscope mounted on the 12-inch telescope in NASA’s Lear Jet Observatory. The Cornell group used this instrument to discover the 158-micron far-infrared radiation emitted by singly-ionized carbon. Ionized carbon consists of carbon atoms with one electron removed. This form of carbon is a powerful cooling agent in interstellar space.
Credit: Courtesy Ray W. Russell

Besides using rockets we also carried out observations from high-flying airplanes. With infrared astronomy we began studying the detailed chemistry of interstellar gases from which stars eventually form. You can only form a star out of a gas cloud if the cloud is able to cool itself by radiating away energy. Atomic hydrogen, H, which is the most abundant atom, and molecular hydrogen, H2, are the most abundant substances in the Universe. Neither of the two is effective at radiating away energy. You have to have other chemical elements in interstellar space, so a gas cloud can cool itself, contract under its own gravitation, and form stars.

Certain atoms like carbon or oxygen radiate very efficiently to cool a gas cloud. As the gas cools and contracts through its gravitational self-attraction its temperature rises. This temperature increase alters the chemistry, producing new atoms or molecules radiating away energy at successively higher temperature, allowing the gas to contract even further. A complex succession of such processes eventually ends in a final contraction that forms a star.

In star formation thermal energy is radiated away in the infrared, partly because the radiating gases are at rather low temperatures at which their emitted energy lies mainly in the infrared. In addition, dust in the dense gases where stars are forming absorbs visible light and re-emits it as infrared radiation.