It took about fifty years and eventually hundreds of dedicated scientists and engineers to solve many of the technical problems I have mentioned. When we first started, the thought that liquid helium could maintain a large space telescope cold for four or five years in space, would have seemed outlandish. The requirements to make this happen were so stringent. Today, every large space agency takes building such telescopes for granted.

Today’s telescopes can scan the whole sky and provide images. Observations with spectrometers often also yield analyses of chemical processes at work in the regions observed.

For me, it has been fascinating to see how different colleagues in infrared astronomy have produced striking advances using the most diverse approaches. We know of no rigid rules prescribing how we will best advance knowledge. Programs of the type I was hoping, in the early 1960s, we might some day be able to tackle are now considered almost routine. Any number of scientists now know how to carry them out.

I sometimes wonder whether I would have started on this line of research if I had thought it would take fifty years. Would you try solving a problem if you thought you’d be working away at it for half a century? One of the things about trying to do big things in science is that you’ve got to be a fantastic optimist. I think I always was that, maybe in the extreme. 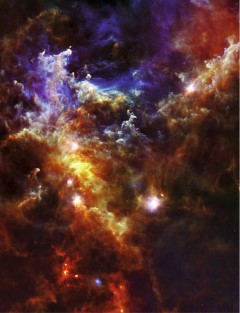 The Rosetta Nebula: The Rosetta Nebula region of our Milky Way galaxy observed in three infrared wavelength ranges, 70 microns** shown here in false color as blue, 160 microns shown in green, and 250 microns shown in red. Stars can be seen forming in large numbers, sending out shock waves into their turbulent surroundings lit up by heated dust grains emitting infrared radiation. Temperatures are highest in the brightest white and blue regions, and coolest in regions shown in red. The image was obtained with the Herschel Space Observatory launched by the European Space Agency with important participation by NASA. The instruments onboard were developed by European consortia, and the image was obtained and analyzed by a team led by F. Motte in France. ** 70 microns roughly corresponds to the diameter of a human hair.
Credit: Credit: ESA/Herschel/PACS/SPIRE/HOBYS consortium