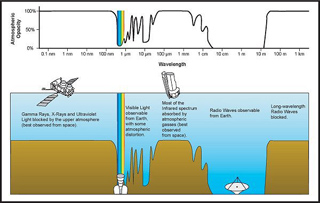 Atmospheric Absorption of the Infrared: The Earth’s atmosphere absorbs most of the radiations coming from space, including most of the infrared spectrum. In a few select wavelength regions, called windows in the spectrum, the atmosphere does permit radiation from stars and galaxies to reach Earth’s surface, where it can be viewed with appropriate telescopes and detectors. These regions include the optical, or visible, spectrum, radio wavelengths, and a small portion of the infrared.
Credit: NASA/IPAC

While in Cambridge, I began thinking of eventually applying my knowledge of infrared methods to astronomy. I also thought more about how I could combine astronomy and chemistry. I had an idea of some of the problems that one would want to solve, by exploring the universe in a wavelength range where not much astronomy had been done so far. Why not apply what I had learned in the laboratory and build instruments to provide access to the infrared wavelength regime where chemical spectroscopy would identify the chemical molecules in galaxies?

Before undertaking spectroscopy, however, I recognized I would first need to do something simpler, to see whether I might detect any infrared radiation at all, particularly at long infrared wavelengths where nobody had succeeded in astronomical observations at that time. This would require a specially cooled telescope fitted into a rocket able to rise above earth’s atmosphere.

In the 1960s and 1970s, there were a few astronomers and astrophysicists who were trying to do infrared work using ground-based telescopes. Frank Low at Rice University, and Gerald Neugebauer at Caltech, were exploiting narrow infrared atmospheric windows where the atmosphere was transparent. They made important discoveries of stars and galaxies that emit far more radiation in the infrared than at optical wavelengths. But, to gain access to the entire infrared wavelength range, I would need to develop low-temperature telescopes operating far out in space above Earth’s atmosphere, using deeply cooled sensitive infrared detectors.