A Growing Interest in Astronomy 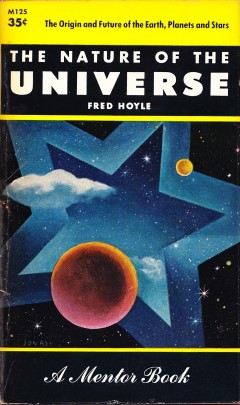 It wasn’t until I came to Eniwetok, at age 25 that I became interested in astronomy.

I had known I’d be in the Pacific for four or five months. We had been told ahead of time that the Pacific Proving Grounds were an entirely male enclave with few diversions. I therefore took a lot of books along to read in my free time. One of them was a popular book, The Nature of the Universe by Fred Hoyle, a Cambridge University theorist.

Hoyle was one of the originators of a new theory of the Universe: the steady state theory of cosmology. I read his book and thought. “Gee, that’s kind of interesting. I think I could do this type of thing.” By this time I could figure out, and calculate on my own, some of the details of what Hoyle was describing. It was pretty neat stuff.

Years later, I would receive a post-doctoral fellowship to work with Fred Hoyle. I couldn’t believe my good fortune! But first I needed to obtain a doctoral degree. There was no way forward without that.

Soon after completing my tour of duty at Eniwetok and Bikini, my two years of military service ended and I went back to graduate school, this time at the Massachusettes Institute of Technology, MIT, in Cambridge, MA.