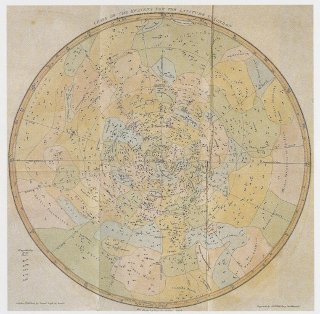 Chart of Stars Visible from London: This chart from 1834 illustrates the night sky as seen from London. The map is drawn centered on the zenith at London. Colors represent the regions of the constellations. The brightness of the stars are indicated by the relative size of the dot; see the legend in the lower-left corner of the map. Image from A Familiar Treatise on Astronomy. Jehoshapaht Aspin. London: M.A. Leigh, 1834.
Credit: Courtesy Adler Planetarium & Astronomy Museum

I was devastated when my father died in 1769 from ill health developed during the Seven Years War. I was only 19 years old and was now doomed to be a servant for my family.

William became an organist in Bath after moving to England, and five years after my father died he wrote to my mother asking her to let me come to England to help him in his job as music director and to keep house for him. My mother eventually let me go when William gave her money to hire another person to take my place.

William started right off teaching me about his new hobby, astronomy. I learned about the constellations on the way to England. Later, my brother would give me physics and mathematics lessons over breakfast which he called “little lessons for Lina”.

William also taught me that Galileo was not the first to make a telescope or even use it to look at the sky, but that he is the most famous of the early users of the telescopes.