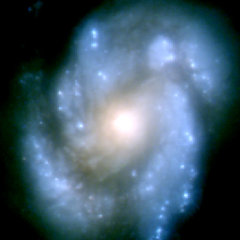 M100 Galactic Nucleus: This image was taken before the optics was fixed and demonstrates that the optical error generates images that are not much better than images taken with ground-based telescopes and were much less clear than expected. The picture is from the Wide Field Planetary Camera 1.
Credit: NASA

Watching the launch of the now-named Hubble Space Telescope on the fine clear morning of April 24, 1990 was tremendously exciting for all of us present. After advocating for the funding of the telescope, I had little to do with the design and building of the telescope. My next close contact with Hubble would be a phone call a few months after launch passing along the news of a flaw in the mirror: spherical aberration.

The images coming back from Hubble were blurry and out of focus. Two months after launch it was determined that the surface of the mirror on Hubble had been ground to the wrong shape. While the effect was small, 1/50th the thickness of a sheet of paper too thin, the image degradation was catastrophic to the goals of the telescope. The images were a factor of 10 times bigger than expected and most of the light would not even fit through the small apertures of the spectrographs. Newspapers carried headlines like “Hubble Telescope Crippled.” We set out right away to correct the problem. Astronauts were scheduled to go to Hubble in 1993 for routine service. That service mission now turned into a rescue mission. 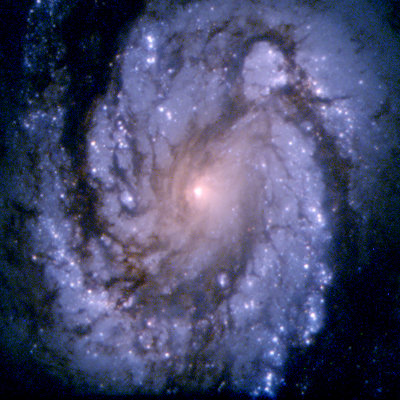 M100 Galactic Nucleus: This image was taken with Hubble's Wide Field Planetary Camera 2, installed to correct Hubble's optics. The difference in clarity is dramatic and represents the realization of the anticipated quality of images from a space-based, optical telescope.
Credit: NASA