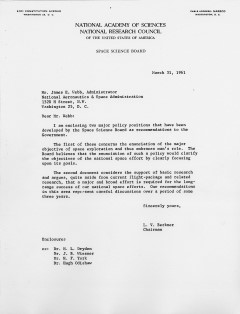 Space Science Board 31 March 1961 Letter Report to NASA, “Man’s Role in the National Space Program: The Space Science Board was appointed in 1958 and charged to survey the scientific aspects of the human exploration of space through the use of rockets and satellites. This is the cover letter of a report outlining the Board’s policy recommendations to James Webb, the NASA administrator at the time.
Credit: National Academy of Sciences

October 4, 1957, changed everything. That is when the Soviet Union proved that Earth-orbiting satellites were technologically possible by launching Sputnik.

After the launch of Sputnik, the US government was eager to send its own satellites into orbit around the Earth. I was immediately contacted by the Air Force about Princeton working out some of the problems of sending an intermediate-sized telescope into space orbit.

As a result of this new fervor, NASA was formed in 1958 and began forming a community of scientists to think about the possibilities of doing astronomy from space in a very real way. In the early 1960s working groups were organized by the Space Science Board of the National Academy of Sciences at NASA's request to discuss the future of space research and it was at these meetings that conversations about a large space telescope began in earnest. I was part of all of these groups. During this time, programs were under way to send medium-sized telescopes into Earth orbit. These were called the Orbiting Solar Observatory and Orbiting Astronomical Observatory programs. It was seeming more and more likely that a large, general purpose space-based telescope was becoming a reality.

Immediately after it was formed in 1958, NASA began planning the launch of three Orbiting Astronomical Observatories (OAOs), each designed to carry out astronomical research at ultraviolet wavelengths, using telescopes up to a meter in diameter.

For me, perhaps the highpoint of my career was that day in August 1972 when our ultraviolet spectrometer aboard the Copernicus satellite (OAO-3) was turned on from the Goddard Space Flight Center, several days after launch, and was found to be operating properly. Copernicus was the fourth attempted launch of an OAO satellite, and the second successful mission. It remained in operation for 9 years. 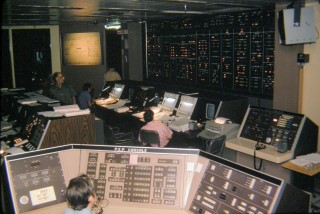