Since William Herschel died in 1822, much progress has been made in physics and in the measurement of time. For example, Herschel observed a shadow in the sky with a significant absence of stars; he called this spot a hole in the sky and thought it was an empty space that would eventually fill up with stars moving in from the edges of the hole. In those early days of astronomy the nature of stars and galaxies could not be properly considered because there was no knowledge of dust grains, molecules, atoms, and electrons. Now, my interest is in the formation of the dust clouds and their eventual evolution into stars. We now understand that Herschel's "holes in the sky" are dark, dense dust clouds with the stars embedded. The dust makes the stars invisible in these regions. 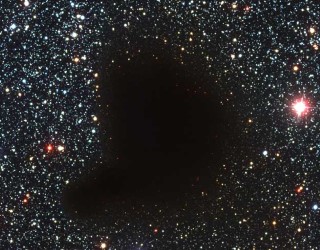 Hole in the Sky: Where did all the stars go? What used to be considered a hole in the sky is now known to astronomers as a dark molecular cloud. Here, a high concentration of dust and molecular gas absorb practically all the visible light emitted from background stars. The eerily dark surroundings help make the interiors of molecular clouds some of the coldest and most isolated places in the Universe. One of the most notable of these dark absorption nebulae is a cloud toward the constellation Ophiuchus known as Barnard 68, pictured above. That no stars are visible in the center indicates that Barnard 68 is relatively nearby, with measurements placing it about 500 light-years away and half a light-year across. It is not known exactly how molecular clouds like Barnard 68 form, but it is known that these clouds are themselves likely places for new stars to form. It is possible to look right through the cloud in infrared light.
Credit: FORS Team, 8.2-meter VLT Antu, ESO Clouds in Galactic Disc: Idealized interstellar clouds from Lyman Spitzer's Searching Between the Stars (New Haven, CT: ©Yale University Press, 1982). The space between the stars in the disk of the Milky Way Galaxy is permeated with cloud structures such as those shown above. The dark, central cores are about the same separation as two stars in the Milky Way (about 3 light years). The dark spots contain gas at 100 degrees, the white rims contain gas at 8,000 degrees, and the space between the cloud structures is 1 million degrees.
Credit: Reproduced by permission of Yale University Press

My name is Lyman Spitzer, and I am an astrophysicist. I was born June 26, 1914 and grew up in Toledo, Ohio. I didn’t become interested in science until I was in high school and took a physics class. A few friends and I talked our physics teacher into giving us an astronomy class. In that class I developed a life-long fascination with astronomy.

While in high school, I was also interested in the development of a global transportation system based on the electromagnetic propulsion of levitated cars in tubes containing a vacuum. My concept was to integrate intercity travel with local transportation, so that one could get into a car on a high floor of an office building, dial the local or long distance number desired, and get out some minutes later at the desired floor in one’s own city or in some remote center. I spent so much time considering the various details of such a system that my parents, seriously concerned for my sanity, extracted a promise from me to stop thinking about this enterprise! But I didn't stop thinking about big projects at the time when they were still outlandish as you will see later when we discuss the Hubble Space Telescope. Vacuum Tube Transportation System: In 1950 Robert Goddard patented a vacuum tube transportation system like the one theorized by Lyman Spitzer when he was in high school. This is an image from his patent application. The bullet-shaped object is a transportation car; it is shown in a tube that is evaucated so there is no resistance to its motion. The structures below the evacuated tube are a system of magnets that levitate the car.
Credit: Public Domain