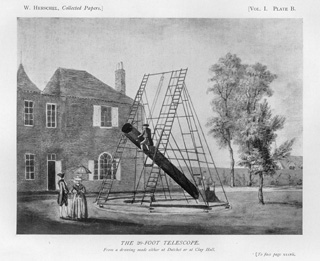 Mind you, all of this telescope making was going on while William was still teaching music and giving concerts. He would read books about optics and astronomy late at night after his work. Soon, astronomy replaced music as William’s passion. To my dismay, almost every room in our home turned into a workshop for telescopes: one for grinding the shape of the mirrors; one for polishing the mirrors; one for forming the tube; and a foundry in the basement for melting and forming the metal mirrors. I was kept very busy helping with William’s music obligations, running the household, and now helping to make mirrors for telescopes.

I also began helping William with his observations. He would sit on a ladder, look through the telescope and shout down to me what he saw. I would shout back to make sure I heard correctly and then write notes about the object’s position and movement. We would do this nearly every night that there was clear weather.

William was finally able to give up music and study astronomy full-time when King George III offered him a job as ‘The King’s Astronomer’. This happened after William named his newly discovered planet after the King; he called the planet Georgium Sidus (George’s Star).

We were kept very busy. By night we would observe and by day we would make telescopes and write up observations from previous nights. There was little time for anything else. When William would travel, I would use a telescope he made for me with which I discovered eight comets. Working together we made a survey of the sky and William discovered over 2400 objects he called nebulae as well as many double stars. 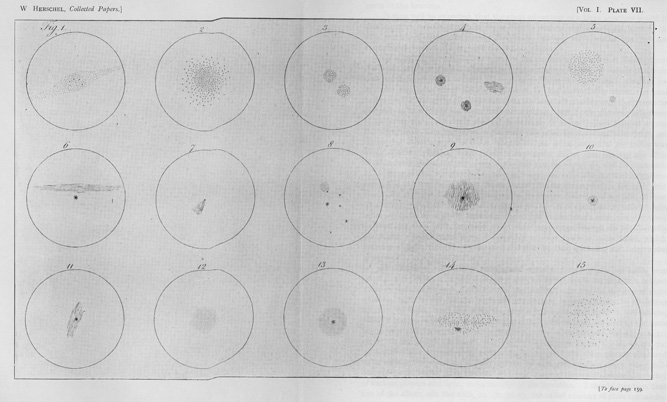 Herschel's Nebulae: Herschel's drawings of some observed nebulae from The Scientific Papers of Sir William Herschel published in London in 1912 by the Royal Society and the Royal Astronomy Society. It is interesting to recall that Herschel did not know the nature of these objects; that is what he was trying to determine. Notice, for instance, that there are bright black points next to some of the fuzzy objects. The fuzzy objects are millions of light years away, but the off-center black points are in our Galaxy (less than 0.3 million light years away). In 1754, Emmanuel Kant suggested that this was the case, but it was not proven until 1927.
Credit: The University of Chicago Library