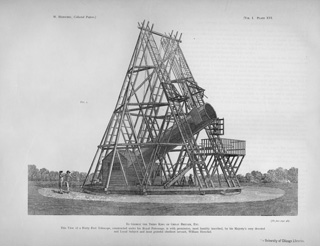 Herschel's Forty-foot telescope: William Herschel built a 40-foot telescope under the patronage of King George III. Ultimately Sir William and Caroline found the 20-foot more useful for some purposes. This drawing is from The Scientific Papers of Sir William Herschel published in London in 1912 by the Royal Society and the Royal Astronomy Society.
Credit: The University of Chicago Library

William continued to make bigger telescopes to better see the objects for his survey of the faintest stars in the sky. His instruments became the best you could buy. In 1785 the King paid William to make what was known as the ‘Great Forty-Foot.’ When this telescope was finished four years later, it was the biggest telescope in the world and remained so until 1845. The mirror was 48 inches in diameter and the tube was 40 feet long. William would observe from a platform high on the telescope and I would write his notes in a hut down below. This time, instead of shouting down at me, William would talk to me through a speaking tube.

I remained his assistant and was even given a yearly pension from the King at this time. This made me the first woman in England to be paid for working in astronomy. I was paid fifty pounds per year whereas William was paid two hundred pounds per year. I was happy to finally have some money of my own!

Telescopes kept getting bigger in the quest to produce clearer images. In 1845, William Parsons, 3rd Earl of Rosse, built a telescope at his estate, Birr Castle, in Ireland. Lord Rosse’s telescope with its 72-inch mirror was the largest in the world, surpassing our forty-foot. It was known as ‘The Leviathan of Parsontown’. By the time it was completed, William had died and I was 95 years old. I was living back in Hanover with my younger brother Dietrich. The idea that this Leviathan could be a better telescope than William’s kept me laughing the entire day when I first heard about it. 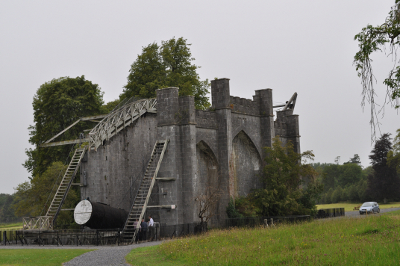 The Leviathan of Parsontown: The black tube with the white cap is raised and lowered between two stone walls rather than the wooden frame used by Herschel. The telescope was raised and lowered with a windlass located behind the telescope. The observer stood on the platform at the top end of the telescope, just as with Herschel's 48-inch diameter telescope. Because the telescope collected just over twice as many photons in a given time as Herschel's 48-inch, and because the images were better, Lord Rosse was able to discover the spiral arms in galaxies with this telescope. The discovery was very well known at the time, though no one could explain the meaning of the spiral arms.
Credit: Image courtesy of Anna and Don York, 2011

I was a great help to my brother and in 1835 the Royal Astronomical Society gave me an honorary fellowship in recognition of my work. This was amazing since it was an all male organization. In 1846, I was given the Gold Medal for Science by the King of Prussia. The letter that accompanied the medal said “In recognition of the valuable services rendered to Astronomy by you as the fellow-worker of your immortal brother, Sir William Herschel”.