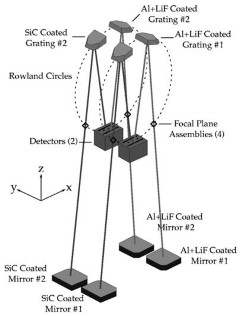 I came to Colorado and worked for Dr. Cash in the beginning. I became involved with the spectrograph design for the FUSE ultraviolet satellite, for which the PI was Warren Moos from Johns Hopkins University. The program had originally been conceived as a large-scale mission, costing more than $300,000,000 and utilizing a large, grazing-incidence telescope; diffraction gratings with very complex polished shape and mechanical ruling; and a detector like the ones planned for the Space Telescope Imaging Spectrograph (STIS) (Multi-Anode, Microchannel arrays, or MAMA’s). That mission was clearly going to be too expensive, so we searched for a different design, and I came up with the idea of a normal incidence telescope with a spherically shaped holographic grating, and delay-line microchannel plate detectors.

The fundamental design limits were, first, that there could be no more than two reflections in the system (due to the low efficiency of reflections of ultraviolet photons at normal incidence), and second, that the gratings could not be larger than a certain size. This led to the division of the instrument into four physical channels: two pairs of very similar instruments providing inherent redundancy. This design was accepted by NASA and the FUSE team, and I was selected to build, align, and calibrate the spectrograph portion (gratings and detectors) at the University of Colorado. We delivered the assembled spectrograph in 1998.

In parallel, I started writing my own proposals. When I won the big program on Hubble, the Cosmic Origins Spectrograph in late 1997, which I will talk about later, I was promoted to the faculty and became a professor. So that’s my career trajectory and that’s how I came to be sitting where I am.