The process I have described: the debates over the meaning of data, the obtaining of possible solutions, and the building of telescopes to test newer ideas is the hallmark of pure research. The practical applications of this type of research are seldom seen while the process is going on. But decades later there seem to always be practical applications of the evolving technology which improve our daily lives. Apart from answering our questions about our place in the Universe, we are producing new products that are useful to all mankind. 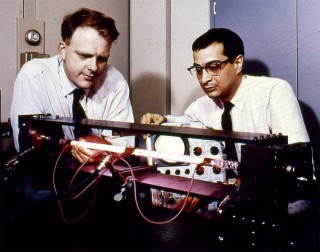 I think there’s really a short-term/long-term view in terms of the public good. People like to see technology that ended up in an artificial heart, or cancer cures, or cars that get a hundred miles per gallon. I want cancer cured and a 100mpg car, too. But astronomy isn’t really providing a lot of that. It is doing basic research, and in the long-term view of things basic physics research is the driver for advancement. When scientists in the 1920s and 30s were developing quantum theory and how an atom interacts in a structure, nobody thought that it would to lead to the microchip or the laser. When the laser was invented, the phrase was: “this is a solution in search of a problem.” Nobody knew what to do with it. Now, of course, lasers are everywhere. Without lasers, we wouldn’t have scanners in the grocery store; you wouldn’t be able to check in to your flight with your smartphone. And without quantum mechanics we wouldn’t have been able to design the computer.

We now all understand that while it’s a slow process, the long-term evolution of new technology creates many, many jobs and this is good for everybody. However, the parallel effect of leading mankind to understand its place in the Universe is of great human interest and fascinates me.