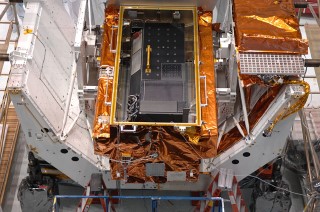 Cosmic Origins Spectrograph: COS (black box) sits in its protective carrier waiting for delivery to the Hubble Telescope.
Credit: NASA

The need for efficiency in the ultraviolet, requiring an all-reflective optical system with minimal optical components, really tied my hands as a designer. Because the standard way in which you correct astigmatism in an optical design is to make small corrections at each optical element, with a greater reduction in overall blurring the more optical elements are used. If I’m getting 99% reflectivity at the surface of each mirror, then I can just use nine mirrors and it makes it very easy to take care of optical imperfections. But if I’m getting 50% reflectivity and I use nine mirrors, I have nothing left at the end of it: the optical system would have an efficiency of less than 1%. We have to figure out other ways to correct the flaws by using very few optical elements, each of which is extremely complex. With COS we accomplished it with only one such complex optic.

The COS grating is the single reflecting element with which we make these corrections. There are several different gratings that can be moved in and out of the beam, but only one is used at a time. A grating consists of a substrate, usually glass, on which grooves have been etched by an ion etching machine. COS has 3,600 grooves per millimeter. Each groove is curved to a specific shape, and the space between each groove is slightly different, in a designed pattern, to control the direction of the light beams. The unevenly spaced grooves along with the system that corrects the original main flaw in the Hubble optics, allows us to get excellent images.

It's not perfect. There is residual astigmatism in the system. This means that instead of forming a perfect point (a stigmatic image, in optics terms), a star forms a short line at the detector. (Astigmatic means not-stigmatic, i.e., not perfect.) But it does it well enough to accomplish the science objectives we set out for COS, and it has vastly higher efficiency, so we’re able to get a lot more light.

The Space Telescope Imaging Spectrograph (STIS), COS’s predecessor on Hubble, took a different approach: it uses more optics and corrects more flaws. Therefore, the images it makes are sharper but a lot less light reaches the detector. If you’re looking at a bright object, the STIS will actually give you better data, but if you’re looking at a faint object you’ll want to use COS. That was the idea: to make them complementary so that we could then span the whole range of bright targets and faint targets. In astronomy, "faint" in general means far away, and if you want to understand cosmology and the history of the Universe you have to look at things that are far away. 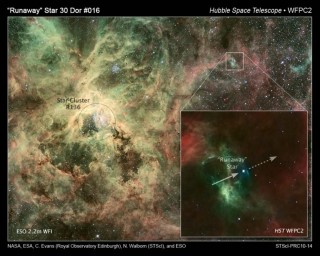 Hubble Catches Runaway Star: A heavy runaway star is rushing away from a nearby stellar nursery at more than 250,000 miles an hour, a speed at which one could travel to our Moon and back in two hours. Tantalizing clues from three observatories, including the Hubble Space Telescope's Cosmic Origins Spectrograph (COS), and some old- fashioned detective work, suggest that the star may have traveled about 375 light-years from its suspected home, a giant star cluster called R136. Nestled in the core of 30 Doradus, R136 contains several stars topping 100 solar masses each. Also called the Tarantula Nebula, 30 Doradus is roughly 170,000 light-years from Earth.
Credit: NASA, ESA, C. Evans Royal Observatory Edinburgh, N. Walbom STScI, and ESO