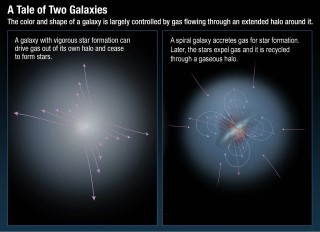 A Tale of Two Galaxies: All modern simulations of galaxy formation find that they cannot explain the observed properties of galaxies without modeling the complex accretion and "feedback" processes by which galaxies acquire gas and then later expel it after chemical processing by stars. Hubble spectroscopic observations show that galaxies like our Milky Way recycle gas while galaxies undergoing a rapid starburst of activity will lose gas into intergalactic space and become "red and dead."
Credit: NASA; ESA; A. Feild, STScI

Ultraviolet spectroscopy provides us with unique information about the Universe. What access to the ultraviolet has really allowed us to do in terms of tools is to understand the conditions and physical processes going on in gas throughout the Universe and in the upper atmospheres of stars. It’s all about the physics.

One of the big issues in astronomy right now is that we don’t really understand how galaxies form. We see galaxies, and they’re all formed up, but we don’t understand how they got to be the way they are or why they look the way they do. We think we understand why they have spiral structure, but why do they have the kinds of stars that they do? Why aren’t the galaxies bigger or smaller? There are obviously some physical laws controlling the shapes and sizes of galaxies that we don’t understand, and we’d like to. It also appears that galaxies constantly have stuff fall into them, even today, otherwise they’d look different. The materials presumably is coming from the gas in the intergalactic medium, which is very, very difficult to study, and the ultraviolet is the best way to get at it.

I think the next big breakthrough the ultraviolet will provide is understanding how galaxies interact with the gas in the intergalactic medium. The gas that’s sort of falling into the galaxy or being ejected from the galaxy but still interacting with the galaxy is often called the circumgalactic medium. It’s a very hot topic now: theorists are trying to model it, and they have all sorts of interesting models, but we have no good observations to tell whether these models are right or wrong. Eventually, of course, we hope to also understand galaxy formation and galaxy evolution.