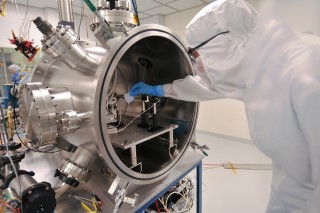 Vacuum Test Chamber: LASP engineers conduct extensive in-house testing on instruments to determine that they are ready for deployment into the sometimes inhospitable conditions of space.
Credit: Regents of the University of Colorado / Glenn Asawaka

In the ultraviolet, the technology is not as well-developed as in other wavebands, especially those for which there are commercial or military applications. In modern infrared astronomy, for instance, some detectors can detect 98% of the photons, which would indicate 98% efficiency. The mirrors in an optical or infrared telescope only absorb 3% of the photons at each surface, meaning that they have 97% reflectivity. By contrast, the detectors in many far ultraviolet regions only measure 10% to 20% of the light that falls on them: eighty or 90% of the signal is lost by the detector measuring it. Also, in the ultraviolet, reflectivity is sometimes as low as 30%. The only way to get more light in infrared and optical astronomy is to build bigger telescopes. There’s an enormous opportunity for improvement in the ultraviolet to get more light without building bigger telescopes. The reason is that ultraviolet astronomers are starting with systems that are much less efficient than those in the infrared and optical. Therefore, I see ultraviolet astronomy as a technology-driven field, and the astronomers who are interested in it have had to do much of the development themselves.

It is true that there are some ground-based applications for ultraviolet technology, but solutions to working in the laboratory vacuum are not always applicable in space. For one thing, if the detector fails in an Earth-based vacuum, it is easy to turn the chamber off and fix the instrument. However, the vacuum of space cannot be turned off. If the detector fails in space, there is often no way to fix it. For another thing, if a solution to a laboratory application is inefficient, the light source can be turned up to provide more photons to the detector, but astronomers cannot just turn up the stars if there is an inefficient ultraviolet detector in space. Once again, ultraviolet astronomers are forced to start with inefficient instruments because the technology is not there to build the technology for space.