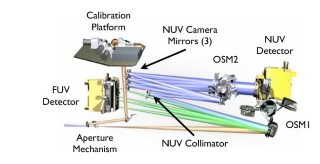 The COS Optical Path and the Locations of the Mechanisms: The optical path is drawn to scale, with all elements in proportion and in their correct relative locations. All light enters the spectrograph at the Aperture Machanism. (New third sentence) OSM1 has elements that allow the observer to observe far UV photons (green) or near UV photons (blue). The green channel, which shows the path of the far ultraviolet photons, has to be very simple due to the need to minimize reflections and have the highest efficiency coatings on the reflections that are required. For the near ultraviolet (NUV), wavelengths longer than 1600 Ångstroms, highly-reflective mirrors and efficient detectors are available allowing for a more complex light path to fit into a small space.
Credit: NASA/STScI

As you can see, there are opportunities to improve the field through technology as opposed to relying on building a bigger telescope. This is what has happened on the Hubble Space Telescope: the original spectrographs were powerful, but inefficient. By adding UV spectrographs with new technology to the existing telescope, an enormous gain was obtained.

One of the first challenges for designing UV optics is that standard, sophisticated tools used for designing optics that direct the path of the photons involves using lenses. Any instrument built for use in the ultraviolet is built for photons that want to be absorbed by the materials that are used to construct the components: the mirror or the filters. For most of the common individual atoms in the Universe (hydrogen, carbon, silicon, etc.), photons with energies in the ultraviolet have a high probability of being absorbed by the atom. This also explains why the atmosphere is opaque to ultraviolet light.

Photons that are absorbed in the optical path are lost on the way to the detector. The whole point of an astronomical telescope is to collect as many photons from distant objects as possible. The photons carry all of the information that we use to understand stars, galaxies and gas in the Universe. Since lenses are not efficient in the ultraviolet, a new suite of design tools is necessary to build efficient spectrographs in the ultraviolet. New design principles have to be developed.

It is a very important matter, in maximizing efficiency, to have no lenses or filters in the telescope system at all. Then, at no point does a photon have to actually pass through anything, which is not the case in most optical or infrared systems, where photons travel through some combination of lenses, filters and windows.

FUSE, the experiment that I worked on with Dr. Moos, is an example of an all-reflective system. In the ultraviolet, each bounce from a reflective surface makes you lose a significant amount of light, so you want to design the system with as few optical elements as possible. In order to avoid photon losses, very specific materials need to be used to coat the mirrors. Special, highly reflective coatings are often used to avoid this problem.

The Cosmic Origins Spectrograph (COS) on Hubble, for which I am the principal investigator and on which I spent a decade working, is an all-reflective system as well, and it is the only one on Hubble. The light, after bouncing off both of Hubble’s mirrors, only bounces off of one optic in the spectrograph before going to the detector.