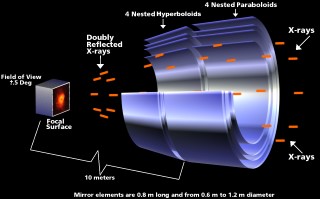 Designing a telescope system to focus X-ray photons requires a radically different approach from traditional telescope systems. For example, optical telescopes use refracting lenses or reflecting mirrors to focus visible light photons, which are plentiful, onto a focal plane. X-ray photons cannot be focused in this way because they have so much energy that they simply pass through the materials used in traditional telescope designs. Furthermore, X-ray sources do not emit many photons, and these few must be distinguished from the cosmic background radiation that fills the Universe.

Having done research on cosmic rays, I knew that X-rays would be as difficult to detect. I must admit this realization was so discouraging that I was on the point of abandoning the ﬁeld. But while reading the Encyclopedia of Physics, I came across a description of internal reﬂection by X-rays. As a graduate student I had dreamed of a magic magnetic funnel that could concentrate cosmic rays on my cloud chamber. Could I realize such a collector for X-rays? The answer was yes! By using a grazing-incidence paraboloid, I could focus incoming X-rays from a large collecting area onto a small detector, thereby increasing the sensitivity of the instrument by several orders of magnitude. Such a telescope did not exist in X-ray astronomy, but I felt that there were no physics obstacles, only technical ones in its development. Thus I was certain that after developing such a telescope, X-ray astronomy could be done.

The President of AS&E immediately called Bruno Rossi to tell him of my idea. I had not seen Rossi since our ﬁrst discussion, but he soon visited and suggested the reﬁnement of nesting many parabolic mirrors.