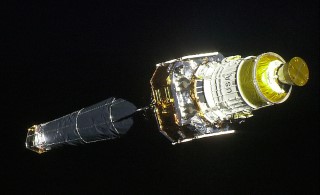 Chandra X-Ray Observatory: Named in honor of the Nobel-prize winning Indian-American astrophysicist Subrahmanyan Chandrasekhar, the Chandra X-ray Observatory is the world’s most powerful X-ray telescope. It has eight-times greater resolution and can detect sources more than 20-times fainter than any previous X-ray telescope.
Credit: NASA

The Chandra X-Ray Observatory that Harvey Tananbaum and I proposed in 1976 was finally launched in 1999, and is still operating in 2013. Chandra is the most powerful X-ray observatory ever placed into orbit. I had been given access to a privileged amount of telescope time to continue my scientiﬁc research on the sources of the X-ray background, which I used for an ultra-deep survey of the southern sky. The Chandra deep field image of 1 million seconds shows the X-ray background resolved to a number of individual X-ray sources. These sources have been identified with optical counterparts by use of the Very Large Telescope (VLT), Hubble Space Telescope, and Spitzer Space Telescope. More than 90% of these sources are supermassive black holes at cosmological distance.

With Chandra, the weakest sources we were detecting in a one-million-second exposure consisted of ten photons, accumulated at the rate of a photon per day. Since the discovery of Sco X-1 the sensitivity of X-ray observation had increased by more than 10 billion times! 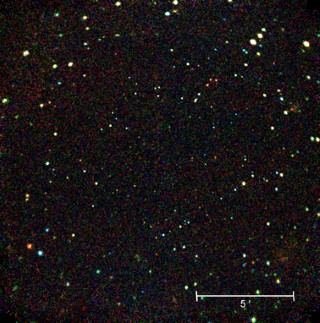 Chandra Million Second Exposure: The Chandra Deep Field South refers to a location in space that offers a relatively clear view through the clouds of gas in our Galaxy, allowing us to clearly see the rest of the Universe in X-rays. This image was created by putting together multiple exposures from Chandra’s Advanced CCD Imaging Spectrometer for a cumulative exposure time of over one-million seconds. The multiwavelength observations of this region were carried out by a team led by Riccardo Giacconi in collaboration with scientists from the Very Large Telescope and the Paranal Observatory, both in Chile. Through the course of these investigations, the X-ray background was determined to originate from the central supermassive black holes of distant galaxies.
Credit: NASA/JHU/AUI/R.Giacconi et al