The Impact of X-Ray Astronomy 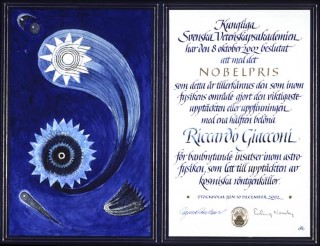 Noble Prize Award: In 2002, Riccardo Giacconi shared the Nobel Prize in Physics, given to him for pioneering contributions to astrophysics, which have led to the discovery of cosmic X-ray sources.
Credit: ®© The Nobel Foundation

In my career I have been extremely fortunate in having been associated with so many wonderful developments in astronomy and in being given the opportunity to work in so many different settings. I was driven by passion, or compulsion, to work in this manner. I could imagine a much more leisurely pace in the progress of X-ray astronomy, but we seem driven to a faster and faster tempo of discovery.

The last fifty years have seen a rapid development of X-ray astronomy from the discovery of the first extra solar X-ray source, Sco X-1, to the detection of celestial objects 10 billion times fainter. This remarkable improvement has allowed detection and study of X-ray emission from all known celestial objects and has opened to our view the high energy Universe, from the formation of young stars to the study of the most distant clusters of galaxies and active galactic nuclei. In a more fundamental way, X-ray astronomy has great importance in the study of the Universe because high-energy phenomena play a crucial role in the dynamics of the Universe.

This work in X-ray astronomy also provided the technical tools that led to important developments with social consequences. The X-ray group at AS&E developed the X-ray imaging technologies that are used for security scanning at airports for dangerous materials. The group also developed the technology that led to computer-assisted tomography (CAT). This technology is used for medical imaging the body in three dimensions, offering better resolution and greater diagnostic accuracy than a traditional X-ray for detecting cancer and other serious medical conditions. Finally, these same X-ray imaging techniques are used for diagnostics in fusion research. Of course, there is also the impact of X-ray images from space. I am always heartened to see the interest and joy on the faces of ordinary people when exposed to the beauty and mystery of the Hubble and Chandra pictures of the Universe in which we live. 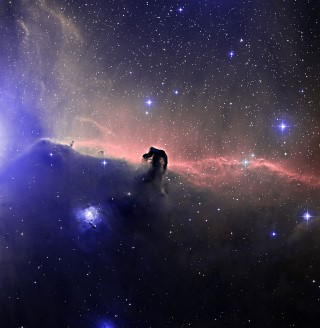 Horsehead Nebula as Seen by Hubble: The Horsehead Nebula is one of the most identifiable nebulae because of the shape of its swirling cloud of dark dust and gases, which resembles to a horse's head when viewed from Earth.
Credit: John Corban and the ESA/ESO/NASA Photoshop FITS Liberator