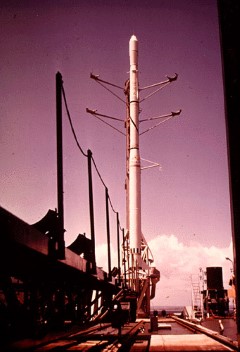 Uhuru Rocket: Awaiting launch from the San Marco Platform in Kenya, Uhuru was the first satellite specifically for the purpose of X-ray astronomy. It was also known as the X-ray Explorer Satellite SAS-A, for Small Astronomy Satellite A, being first of the three-spacecraft SAS series.
Credit: NASA/CXC/SAO

Uhuru spent three years scanning the sky for X-rays, mapping the distribution of more than 300 sources in the sky. Roughly one-half of these were clustered along the plane of the Milky Way, and therefore originated in our Galaxy; the remainder was distributed uniformly over the sky. Equally exciting was the discovery that clusters of galaxies contained, in what had been believed to be empty space within the cluster, low-density plasma at a temperature of millions of degrees containing more mass than all galaxies combined. This gas could never be observed except in X-rays. Its existence and study has opened new areas of cosmological research at early epochs.

It is difficult to describe the intense commitment of our small team to every aspect of the Uhuru mission. I remember waking up at night thinking about possible problems and traveling in my mind inside the satellite to uncover any electrical or mechanical weakness. It was as if I were traveling in space and feeling the effect of vacuum, changing sunlight exposure, and particle bombardment.

It was an unusual arrangement for NASA to transmit data to us on a daily basis. It was, however, essential to the success of the mission, which depended on our ability to change our observing program in response to actual discoveries. Scanning the data received each day and designing the next day’s observing plan became an all-absorbing task. Our entire team became deeply involved in the data analysis and scientiﬁc interpretation. The meetings at which the results were debated and the decisions taken were denoted by ruthless intellectual honesty made possible by mutual respect and a shared sense of privilege in seeing for the ﬁrst time what had not been seen before. The experience became for us the “Uhuru spirit” never to be forgotten by those who took part in this intellectual adventure. 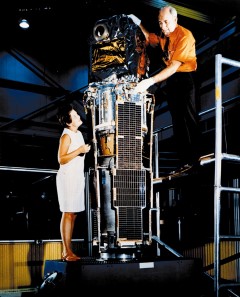 The Legacy of Uhuru: Marjorie Townsend and a colleague with the Uhuru satellite. Dr. Townsend, who was the Project Manager of the Small Astronomy Satellite Program, named the satellite Uhuru, which means freedom in Swahili. Uhuru would go on to detect evidence of black holes, neutron stars, and vast expanses of hot gas in systems containing thousands of galaxies.
Credit: NASA