We went from the ability to observe 5th magnitude stars with Copernicus to 10th or 11th magnitude with IUE, to 15th magnitude with Hubble. With Hubble, there was the opportunity to put another instrument on board every time it gets serviced to boost the orbit and to fix the batteries or gyroscopes. In May of 2009 astronauts visited the telescope for the last scheduled servicing mission and installed a new spectrograph. 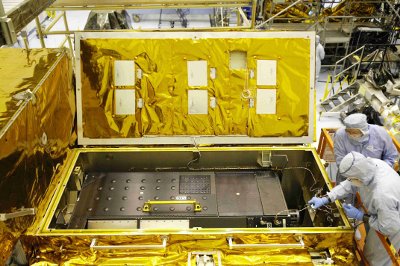 The new spectrograph is one we built here in Colorado called COS, Cosmic Origins Spectrograph. COS allows us to view objects another 3 magnitudes fainter than HRS, an additional factor of 15; so now we are able to view objects to about the 18th magnitude. Ultimately, we are limited by the size of the Hubble mirror; it is only 2.4 meters in diameter, so we are limited by the light-gathering power of the telescope. Our instrument is nearly as efficient as you can get in the far ultraviolet. We're squeezing every last photon out of that mirror. To get bigger gains would require a much larger telescope.

COS has also been looking at planets. One of our planetary science team members took a picture of Io and found copious ultraviolet emission from the aurora of Io. Using COS, Hubble is also taking ultraviolet spectra of Jupiter and Saturn and Uranus and Neptune. The aurorae are the big thing because the planets emit ultraviolet photons from their aurorae, much like the Northern Lights on Earth.

In addition to the Northern Lights on other planets, a lot of us are studying the quasars themselves. In particular, we are studying the accretion disk and the winds and the jets coming out of the black hole, something ultraviolet and X-ray astronomers are very good at. If you ask an ultraviolet or an X-ray astronomer what they are currently observing, they'll probably talk about a quasar or an exploding star or a hot star.