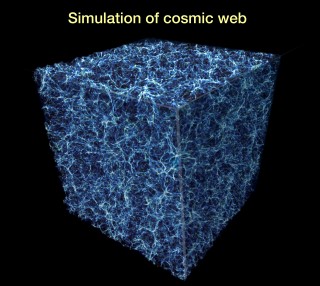 Simulation of the Cosmic Web: This graphic represents a slice of the spider-web-like structure of the Universe, called the "cosmic web." These great filaments are made largely of dark matter located in the space between galaxies.
Credit: NASA, ESA, and E. Hallman (University of Colorado, Boulder)

The theoretical picture that we've put together is that the gas in between the galaxies isn't uniformly distributed. It's not a cosmic fog: it's roped into these little bundles, like a spider's web, and it's called the cosmic web. It's only really well visualized in computer simulations. What we think is going on is that you have the quasar, the background source, and every time the light passes through one of the filaments of the cosmic web, it produces characteristic absorption lines from heavy elements, with a unique redshift. The aggregate of all of the absoprtion lines from a given filament is called a system.

Every time you cross a filament, you get another absorption system. You can count up the filaments, measure what's there, and see what each filament is made of. You can see how fast it's expanding with the Hubble expansion of the Universe through the redshift of the absorption line. We do all that stuff with the ultraviolet spectrum. That's what we've been doing for the last decade.

Now with the Cosmic Origins Spectrograph, we're really cleaning up. We're seeing lots and lots of the little wispy features that we never could have seen before. It contains all of the elements of periodic table like carbon and oxygen and nitrogen, silicon, and sulfur. The gas is highly ionized: a lot of the electrons of these elements have been stripped off by X-rays and ultraviolet radiation. Determining the ionization state of the gas is one of the big things we're using the spectra for. The same spectra are used for multiple projects: studying quasars, studying multiple filaments from the intergalactic medium, and studying the gas around galaxies, known as the halos of galaxies.