The galaxies themselves are blowing their stacks, often ejecting baryons into intergalactic space. I shouldn't say exploded; individual massive stars continually eject material, a process called the stellar wind by analogy with the solar wind, which is a flow of particles away from the star. When these massive stars die, they explode as supernovae, single exploding stars, which individually eject large amounts of matter. In both cases, the speed of the particles exceeds the escape velocity from the galaxy. The aggregate effect of the winds from single stars makes up the galactic wind and produces the global effect of ejected matter from the galaxy. The galactic wind drives material into the halo of the galaxy.

The galaxies are blowing winds out into space. At the same time, matter from the intergalactic medium is falling into the galaxies due to gravity. Sometimes the inflow and the outflow meet and a shockwave results. It's just like waves out on the ocean: things are moving around and crashing into each other. It's a very energetic place, which is probably why many of the the elements are ionized. Many of the elements are 3, 4, or 5 times ionized having lost some of their electrons.

The first question, which I think we're well on our way to answering, is, where is all the baryonic matter that was produced during the Big Bang? Ten percent of it is in galaxies and stars; we've found about another 50% out in between the galaxies. If only 10% of the matter wound up in stars in the galaxy and 90% was left behind, that tells us that the formation of galaxies was very inefficient. Galaxy formation was very inefficient, and it's still going on today. Matter is raining down on our Galaxy pulled in by gravity. And it is like rain, because gravity pulls the raindrops down; the same thing is happening with the intergalactic matter. 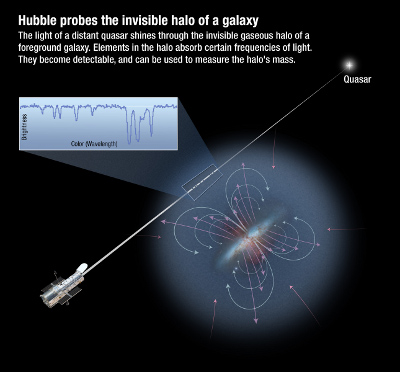 Hubble Probes the Invisible Halo of a Galaxy: Distant quasars shine through the gas-rich "fog" of hot plasma encircling galaxies. At ultraviolet wavelengths, Hubble's Cosmic Origins Spectrograph (COS) is sensitive to absorption from many ionized heavy elements, such as nitrogen, oxygen, and neon. COS's high sensitivity allows many galaxies that happen to lie in front of the much more distant quasars to be seen in absorption. The absorption lines of these ionized heavy elements allow for estimates of the relative abundances of the elements in the gas halo.
Credit: NASA; ESA; A. Feild, STScI