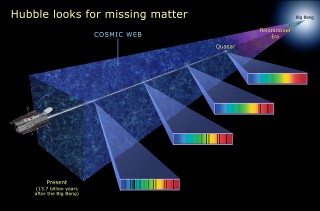 Hubble Looks for Missing Matter: This illustration shows how the Hubble Space Telescope searches for missing ordinary matter, called baryons, by looking at the light from quasars several billion light-years away. Imprinted on that light are the spectral fingerprints of the missing ordinary matter that absorbs the light at specific frequencies (shown in the colorful spectra at right). The missing baryonic matter helps trace out the structure of intergalactic space, called the cosmic web.
Credit: NASA, ESA, and and A. Feild (STScI)

The scientific community is writing papers about these issues, and they only directly address the issue of ordinary matter, known as baryonic matter, meaning that it is made up of protons and neutrons. To interact with light, and thus show up in a spectrum, it has to be ordinary garden variety periodic table matter: carbon, helium, hydrogen, oxygen, etc. The Big Bang produced a huge amount of this ordinary matter.

We think we know how much matter was produced by the Big Bang, but astronomers have only found about 10% of it in luminous matter, stars and galaxies. This deficit has been known for thirty or forty years. The quandry is, where is the missing 90%? It's called the Missing Baryon Problem or the Missing Matter Problem. In speaking of missing matter here, we are not speaking of the exotic dark matter that you hear about; we just cannot find enough baryons. We went out to find it with the hypothesis that it's somewhere in intergalactic space.

We think that some of it is left over; it never formed a galaxy and remains in intergalactic space, or it somehow found its way into an invisible black hole. We think we've found about half of what is missing in intergalactic space; this is what shows up as the narrow absorption lines in the spectra of quasars. How we found it is through ultraviolet spectra similar I just showed you. We took spectra of quasars with COS or with another spectrograph called FUSE, Far Ultraviolet Spectroscopic Explorer, which was built here at Colorado and assembled at Johns Hopkins University. The quasar serves as our lighthouse, or our background source. The light shining through the intergalactic medium revealed the presence of the absorption lines and some of the missing baryons.

Half is still missing. Astronomers suspect that it is also in a much hotter phase of the intergalactic gas, heated to several million degrees and nearly devoid of absorption lines.