Here are some examples of spectra of more and more challenging targets with bigger and bigger space telescopes.

The Ultraviolet Spectrum of the Bright Galactic Star Zeta Ophiuchi: The spectrum was recorded with the Copernicus satellite (1972) by Don Morton. The abscissa (x-axis) is in units of Ångstroms and the ordinate (y-axis) is in units of counts per 14 seconds. The spectrum was recorded point by point using a photo cell. The spectrum from 1197 Å to 1254 Å, which took 20 hours to record, contains four types of features: a) the strong absorption from the interstellar hydrogen line known as Lyman alpha near 1216 Å; b) a set of very narrow, deep lines due to neutral nitrogen at 1200 Å, twice ionized silicon at 1206 Å, and once ionized sulfur just past 1250 Å, all from interstellar gas; c) a wind containing four times ionized nitrogen blowing off the surface of the star at 1000 km/second (1233 Å and 1238 Å); d) general undulations across the top which are due to absorption lines in the atmosphere of the star itself. The sharp, narrow interstellar lines, item b, actually contain two components which cannot be distinguished in this spectrum because of insufficient resolution. This is the spectrum of a star, but the dominant features are from the interstellar medium and the wind from the star. For more information about this spectrum, see Morton, D.C. 1975, ApJ, 197, 85.
Credit: Image courtesy Don Morton. Reproduced by permission of the AAS. 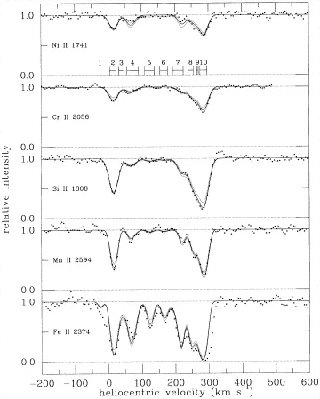 International Ultraviolet Explorer Spectrum of SN1987A: SN1987A is the brightest supernova seen from Earth in several centuries. The abscissa is in kilometers per second (km/sec), and the ordinate goes from 0 to 1 for each panel and reflects the relative strength of each component set. The absorption features shown are predominantly interstellar lines from gas between us and the supernova. However, the supernova is in a nearby galaxy, the Large Magellanic Cloud (LMC). The LMC is just beyond the Milky Way and is moving away from us. The labels above the second spectral strip show groups of interstellar components moving at different velocities, which cannot be resolved separately. The component groups 2, 3, and 4 are in the Milky Way Galaxy, and the component groups 5 through 10 are in the LMC. The black dots are the data points, and the black line is a prediction (a model) including all of the subcomponents for what the interstellar spectrum should look like. The model and the data points agree very well. The ions represented are once-ionized nickel, once-ionized chromium, once-ionized silicon, once-ionized manganese, and once-ionized iron. Evidently, the lines of Fe II (bottom panel) are much stronger than the lines of Ni II (top panel). Note that when referring to the spectrum of the element, astronomers use the notation Fe II for the spectrum of once-ionized iron. Likewise, Ni II is used for the spectrum of once-ionized nickel, etc. For more information about this spectrum, see Welty, D. E., Frisch, P. C., Sonneborn, G., York, D. G. 1999, ApJ, 512, 636.
Credit: Spectrum courtesy Dan Welty. Reproduced by permission of the AAS. 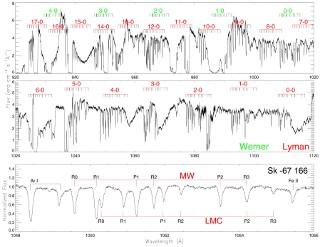 Far Ultraviolet Spectroscopic Explorer (FUSE) Spectrum of a Star in the Large Magellanic Cloud: The LMC star is Sanduleak -67 166. The top two panels cover the spectral region from 920 - 1120 Å. To obtain this spectrum a special telescope, FUSE, had to be built with very few reflections and with a much more sophisticated detector than was used for Copernicus. This spectrum took 60 hours to record, three times longer than it took the Copernicus satellite to observe 50 Å in zeta Ophiuchi, a star that is 10,000 time brighter than this one. For this example, FUSE is effectively 7,500 times more efficient than Copernicus. The spectrum is completely dominated by the lines of molecular hydrogen from interstellar space, some in our Galaxy and some in the Large Magellanic Cloud. The spectrum of molecular hydrogen, which contains two hydrogen nuclei (protons) and two electrons, is obviously much more complex than the spectrum of atomic hydrogen. The vibration of the two protons leads to the bands denoted 1-0, 2-0, 4-0, etc., at the top of the two panels. Within each band are very narrow components more closely spaced than the bands, which are due to the rotational motion of the dumbell-shaped molecules (two hydrogen nuclei). The broad, deep features in the spectrum are due to mass-loss from the star itself. There are also some narrow atomic lines mixed in to the spectrum. The bottom (third) panel is an exploded view of an 8 Ångstrom region centered at 1052 Å, representing the 4-0 vibration band seen center left in the second panel. The rotational components from the Milky Way and from the LMC are clearly marked on the third panel, as are the Milky Way and LMC components from neutral argon (Ar I) a the left end of panel three. The vibration and rotation features are quantized, a reflection of the quantum-mechanical natures of the motions on atomic scales. For more information about this spectrum, see Tumlinson, J., Shull, J. M., Rachford, B. L., et al. 2002, ApJ, 566, 857.
Credit: Spectrum courtesy J. Tumlinson. Reproduced by permission of the AAS. 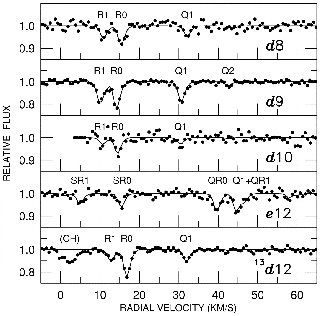 Space Telescope Imaging Spectrograph (STIS) Spectrum of the Star X Per: These are some rotational bands of the carbon dioxide (CO) molecule in the star X Per. Each panel represents only 0.28 Ångstroms of spectrum, or 60 km/sec in terms of Doppler motion. The spectral resolution is much higher than that of Copernicus, the International Ultraviolet Explorer (IUE), or the Far Ultraviolet Spectroscopic Explorer (FUSE). The ability to discern separate interstellar components or rotational components is over 10 times better with STIS than with the other spectrographs in space. For more information about this spectrum, see Sheffer, Yaron, Federman, S. R., Lambert, David L. 2002, ApJ, 572, L95.
Credit: Spectrum courtesy S.R. Federman. Reproduced by permission of the AAS. 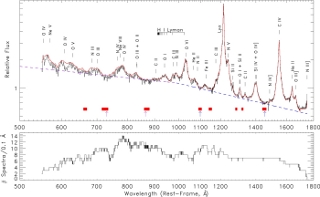 Cosmic Origins Spectrograph Average Spectrum of 22 AGNs (Active Galactic Nuclei): The spectra were shifted to appear as if they were not redshifted before being averaged. All the objects have spectra that look like quasi-stellar objects, but some are of low enough luminosity that the host galaxy is visible and has a name. The main features of the spectrum are as follows: a purple/blue line drawn through the spectrum is the "continuum," mostly due to the AGN, a continuous glow caused by a very hot gas in a strong magnetic field; a red line represents the fitted spectrum of emission lines, thought to arise in a disk that surrounds the central black hole of the AGN. (These are most clear at the right end.) The ions that are seen in emission are labelled: N V, C IV, He II etc. The Roman numeral is the charge of the ion plus one: N V is four-times ionized oxygen, meaning that four electrons have been stripped off the atom. The ion has a net charge of positive four. The black line traces the actual data. Below about 950 Å, neutral hydrogen absorption lines from the intergalactic medium exist in each of the individual spectra, which had to removed as best as possible before averaging. The red rectangles at the bottom denote regions between the AGN emission lines that are taken to represent the continuum emission of the AGN. The resolution is about 20,000 km/sec. For more information about this spectrum, see Shull, J. M., Stevans, M., Danforth, C. W. 2012, ApJ, 752, 162.
Credit: Spectrum courtesy Michael Shull. Reproduced by permission of the AAS.